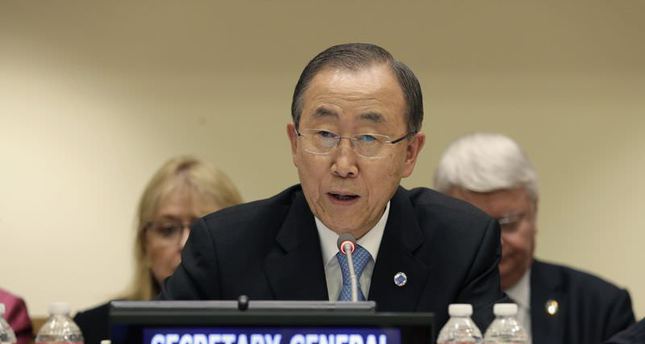 by Oct 11, 2014 12:00 am
UN Secretary General Ban Ki-moon arrived in the Libyan capital on Saturday for a surprise visit aimed at bolstering talks between political parties in the violence-plagued country, his office said.

The North African nation has been sliding into chaos since longtime leader Moamer Kadhafi was toppled in an uprising three years ago, with interim authorities confronted by powerful militias that fought to oust him.

Ban was due to meet members of political parties to support talks aimed at ending a split that has further destabilised the strife-torn nation.

The UN chief was to urge Libyan parties "to press forward with their nascent dialogue in order to restore stability to their crisis-ridden country," his office said in a statement.

The UN mission chief in Libya, Bernardino Leon, managed to bring the rival factions together for talks in the remote oasis town of Ghadames on September 29.

Libya's parliament, which was elected in June, is recognised by the international community but contested by militia controlling the capital Tripoli and by Islamists in the eastern city of Benghazi.

The majority faction in the legislature has been meeting in the far eastern town of Tobruk near the border with Egypt.

The UN estimates that fighting in Tripoli has displaced at least 100,000 people, and another 150,000 have fled the country, including many migrant workers.

Last week, the UN Security Council warned of possible sanctions against those who reject peace in Libya.