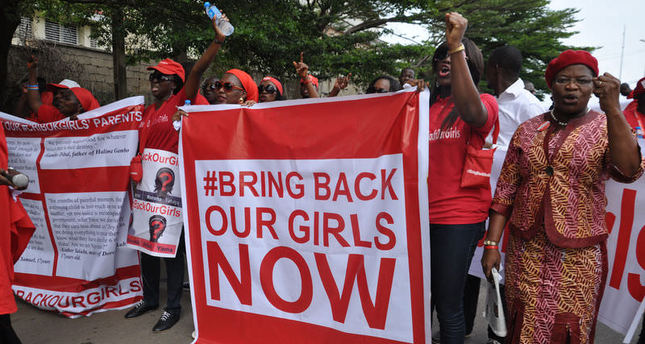 by Oct 17, 2014 12:00 am
Nigeria's government has reached a deal with militant group Boko Haram for a cease-fire and the release of around 200 girls kidnapped six months ago from a school in the northeast town of Chibok, the defence chief said on Friday.

"I wish to inform this audience that a ceasefire agreement has been concluded," Marshal Alex Badeh said in a statement after three days of talks with the militant group that has wreaked havoc in the northeast of Africa's biggest oil producer.

A presidency source said the agreement stretched to the girls, who were abducted from a secondary school in Chibok near the Cameroon border in April, sparking a worldwide outcry.

The girls have remained in captivity ever since, although police and a parent of some of the missing students said last month one of the girls had been released.

President Goodluck Jonathan has been pilloried at home and abroad for his slow response to the kidnapping and for his inability to quell the violence by the militants, seen as the biggest security threat to Africa's biggest economy.

Boko Haram, whose name roughly translates as 'Western education is sinful', has killed thousands of people in a five-year insurgency aimed at creating an Islamic caliphate in the vast scrubland of Nigeria's impoverished northeast.

A senior Nigerian security source confirmed the existence of talks, but said it remained unclear whether Abuja was negotiating with self-proclaimed movement leader Abubakar Shekau, or another faction within the group.

"Commitment among parts of Boko Haram and the military does appear to be genuine. It is worth taking seriously," the security source told Reuters.

The government was negotiating with Danladi Ahmadu, a man calling himself the secretary-general of Boko Haram, the presidency source said. It was not clear if Ahmadu is part of the same faction as Shekau.

Several rounds of negotiations with Boko Haram have been attempted in recent years but they have never achieved a peace deal, partly because the group has several different factions.

"There are some talks but it depends on the buy-in of the whole group. I would be surprised if Shekau had suddenly changed his mind and is ready for a ceasefire," the source added.