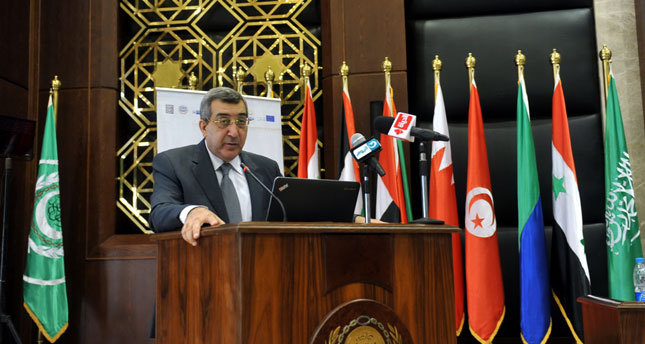 by AA Oct 23, 2014 12:00 am
Egyptian Justice Minister Mahfouz Saber told an EU humanitarian envoy that Egypt "has no political prisoners," insisting that all those now in detention faced criminal charges, according to a Tuesday statement. "Prisons in Egypt are under the supervision of the general prosecution and judiciary," Saber told Stavros Lambrinidis, the EU's special representative for human rights, according to a statement issued by Egypt's Justice Ministry in the wake of the meeting.

The meeting between the two officials also tackled a raft of recent death sentences handed down earlier this year against more than a thousand supporters of Egypt's Muslim Brotherhood group. During the meeting, the ministry said, Saber had objected to Lambrinidis' suggestion that Egypt reduce the maximum remand period at its prisons, which, under Egyptian law, can be extended for periods of up to two years.

"This is an internal issue to be reviewed only by state institutions – no foreign entity has the right to interfere with it," the ministry said. Saber went on to note that over 600 detainees who had not been charged were recently released following "periodical reviews" by prosecution authorities. There is no official estimate for the number of people detained in Egypt since last year's ouster of Mohammed Morsi – Egypt's first freely elected president – by the army.

However, the Egyptian Center for Economic and Social Rights, a local NGO, recently documented over 21,000 cases of people who had been subject to prosecution since Morsi's ouster.