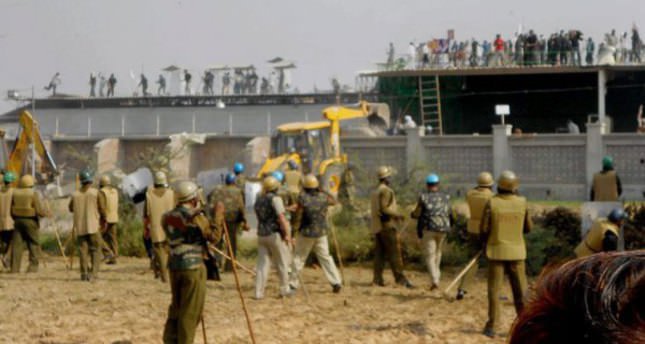 by Daily Sabah with Agencies
Nov 20, 2014 12:00 am
Ten civilians were killed overnight during fighting between the army and Islamist militants near Egypt's border with Gaza, where the military has launched a crackdown in recent weeks, security and medical sources said on Wednesday. At least three of the casualties were children and three were women, the medical sources said. The victims were killed in their home by two mortar shells fired by militants during a night-time curfew, security sources said. The sources said earlier it was possible the victims had been killed in mistaken army air strikes on militants in the area, but later ruled that out. The army spokesman was not immediately available for comment. The officials, speaking on the condition of anonymity because they were not authorized to speak to reporters, say a mortar round killed seven civilians from a prominent Bedouin family in the village of Negah Shabana.

Amid the curfew - imposed on swathes of northern Sinai after militant attacks on Oct. 24 killed 33 security personnel - local residents, medical crews and other sources had limited information about the incident. Egypt is creating a one kilometer-deep buffer strip along the border with Gaza by clearing houses and trees and destroying subterranean tunnels it says are used to smuggle arms from the Palestinian enclave to militants in Sinai. Residents of Sinai, who complain they have long been neglected by the state, say many rely on smuggling goods through the tunnels for their livelihoods and the creation of the buffer zone has stoked resentment.

Families living near Egypt's border with the Gaza Strip have begun emptying their homes due to clashes between security forces and Ansar Bayt al-Maqdis – an al-Qaida-inspired terror group that has allegedly declared allegiance with the Islamic State of Iraq and al-Sham (ISIS). The group is targeting police forces and soldiers on the Sinai Peninsula, a strategically important area that borders Israel, Gaza and the Suez Canal, the fastest shipping route between Europe and Asia.

Two weeks ago, Reuters news agency reported that in the village of Ibshar and eight others along the frontier, 680 houses – home to 1,165 families – are being razed to seal off smugglers' tunnels with hopes it will crush a militant insurgency in the northern Sinai. It is claimed that Ansar Bayt al-Maqdis has launched a beheading campaign against local residents who inform security forces about their upcoming attacks and the location of their militants.