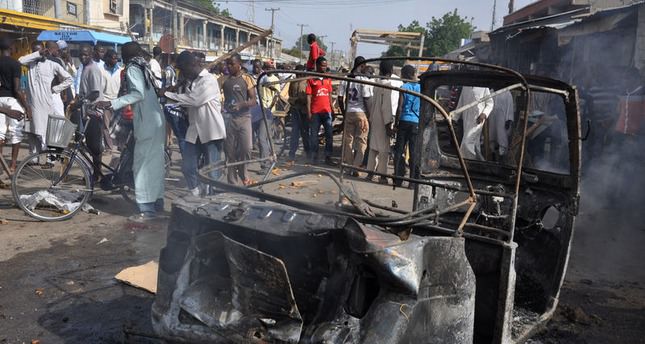 More than 45 people were killed when two female suicide bombers blew themselves up in a crowded market in northeast Nigeria on Tuesday, the latest in a wave of such attacks blamed on Boko Haram.

The explosions in the Borno state capital targeted the same Monday Market area where at least 15 people died on July 1 in a blast also thought to have been carried out by the militants.

Tuesday's attacks came after the militants seized control of another town in Nigeria's restive northeast, adding to their increasing haul of territory captured in recent months.

Health worker Dogara Shehu said he counted more than "45 people killed, some of them completely decapitated" in the Maiduguri blasts in an account supported by another witness.

An official with Nigeria's National Emergency Management Agency (NEMA) confirmed that "many people have been killed" but did not have an official death toll.

"What we have is a case of suicide bombings involving two females," said a senior security source in the city, who requested anonymity because he is not authorised to speak to the media.

The source told AFP that the first bomber stood by a motorised rickshaw packed with goods in the bustling market and took a call on her mobile phone.

"She then dropped it (the mobile phone) and at that moment she blew herself up, so people thought the bomb was concealed in the rickshaw," he added.

"About 10 minutes later, another woman who looked about 19 and carrying what looked like a baby on her back under hijab arrived at the scene that was crowded by rescuers and locals.

"She then detonated the bomb on her back."

Northern Nigeria has been hit by a wave of suicide bomb attacks by women in recent months, including earlier this month in the northeastern state of Bauchi and Niger state in the northwest.

In July, there were four such attacks within a week in Kano city.

The previous month, a woman was said to have blown herself up in a twin bombing in the southwestern city of Lagos, although her involvement was never confirmed.

Weeks earlier, Nigeria saw its first female suicide bombing, when a middle-aged woman detonated her explosives at a military barracks in the northern state of Gombe.

Analysts have said that Boko Haram is using either willing volunteers or coercing young women and girls into becoming human bombs as part of its strategy to create a hardline ISIS.

Three women said to be "female recruiters" for Boko Haram were reportedly arrested in July while an alleged trainer of women bombers was detained in Kano in August with up to 16 "trainees".

Boko Haram has attacked Maiduguri dozens of times during its five-year insurgency, using a range of tactics from suicide attacks and bombings to full-scale assaults on military barracks.

The group was founded in Maiduguri more than a decade ago and the city was once the epicentre of the conflict until its fighters were pushed out into more rural parts of the northeast.