Ebola may have reached peak in Sierra Leone 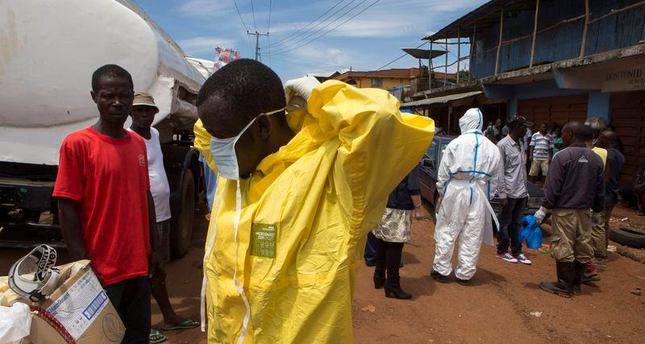 by Associated Press
Nov 26, 2014 12:00 am
The Ebola outbreak in Sierra Leone, which has been surging in recent days, may have reached its peak and could be on the verge of slowing down, Sierra Leone's information minister said Wednesday.

But in a reminder of how serious the situation is in Sierra Leone, the World Health Organization said the country accounted for more than half of the new cases in the hardest-hit countries in the past week. By contrast, infections appear to be either stabilizing or declining in Guinea and Liberia, where vigorous campaigning for a Senate election this week suggests the disease might be loosening its grip.

In all, 15,935 people have been sickened with Ebola in West Africa and other places it has occasionally popped up. Of those, 5,689 have died.

Alpha Kanu, Sierra Leone's minister of information, told journalists in an online press conference that with the imminent completion of two British-built treatment centers, the worst could be over for the country.

"We believe that now that those treatment centers are ready, the transmission of new cases will start reducing," he said. "I don't think we can get any higher than we are now we are at the plateau of the curve and very soon we will have a downward trend, once we have somewhere to take people."

Nearly 1,000 British soldiers, scientists and aid workers are already in the country participating in the Ebola fight and the completion of the latest treatment centers will increase the number built to six.

Sierra Leone has nearly 6,600 of the reported Ebola cases, with about 1,400 deaths, and the infections are increasing swiftly here.

In its release of the latest figures on Wednesday, the World Health Organization said both Sierra Leone and Liberia appeared to be far behind the U.N.-set goal of isolating 70 percent of patients by Dec. 1, with only about 20 percent isolated in each country. Guinea, by contrast, appears to have already passed that target. The agency warned that data is poor and slow to come in, so firm conclusions are difficult.

Kanu, the information minister, agreed that finding beds for patients had been a challenge in the country and predicted that the new centers would expand the country's Ebola treatment capacity to 1,000 beds and would help get the infected out of the community.

He also said that Sierra Leone would repeat its September shutdown when people across the country had to remain at home while medical teams went door to door.

In Liberia a further sign of the country's recovery came when one candidate expressed delight Wednesday at how many supporters turned out for a campaign rally for Senate elections.

"They told me that there would only be 50 people but I see four or five thousand people," said Senate candidate Robert Sirleaf, son of President Ellen Johnson Sirleaf. "That gives me spirit."

Police last week said gatherings are still banned, but political rallies are exempt from the ban.

The Senate election was supposed to have been held on Oct. 16, but that was when hundreds of new Ebola cases were being reported each week. The vote was delayed for two months. With the rate of infection slowing, the green light remains on for the Dec. 16 vote. Polling places are supposed to provide buckets of chlorinated water for hand-washing and a clean pen for each voter to fill out his or her ballot.

Some Liberians are concerned that it might still be too soon for electioneering.

"Even if Liberia was declared free of Ebola today, there would still be no need to ... celebrate until Guinea and Sierra Leone are also declared free," said Jerry Filika, a 19-year-old, underscoring that the deadly disease can easily cross borders.