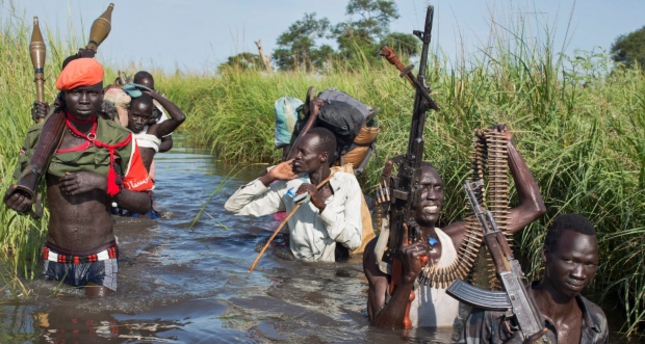 by AA Dec 19, 2014 12:00 am
One year into the war in South Sudan, the world's youngest nation, peace appears elusive as ever. Many experts have blamed this on the personal interests of certain people on both sides of the conflict, both the government and rebel forces. "In any conflict, there are people who are benefitting," Professor Luka Biong, who heads the department of peace and community development in the economics faculty at the University of Juba, told Anadolu Agency. "It is these forces that are not seeing the need for peace," he said. "They will begin to provide a different position," he added.

South Sudan descended into chaos one year ago following power struggles within the ruling Sudan People's Liberation Movement. On Dec. 15 of last year, full-blown armed conflict erupted, which President Salva Kiir was quick to describe as an attempted coup by his sacked vice-president, Riek Machar, and the latter's supporters. Shortly afterward, the epicenter of the crisis shifted to Upper Nile, Unity and Jonglei states, where it has continued to simmer, claiming tens of thousands of lives and displacing nearly 2 million people. The conflict has left about 4 million people at risk of food insecurity, according to humanitarian agencies.

In recent months, the warring camps have held on-again, off-again peace talks in Addis Ababa, under the auspices of the Intergovernmental Authority on Development (IGAD), an East African regional bloc based in Djibouti. Up until this point, however, the talks have failed to bear any fruit. A new round of talks is expected on Wednesday. "This is a senseless war," Biong told AA. "If it continues, the more the parties are going to implicate themselves and the more the people are going to lose their trust in the parties [to the conflict]." "The leaders should know that the African Union's commission of inquiry is going to come up with the names of those people implicated in the atrocities and those ones – when peace comes – will have to face justice," the expert asserted.

Deng Athuai Mawir, chairperson of South Sudan Civil Society Alliance, for his part, believes the crisis is still dragging on because of personal greed. "Look at all of them [the warring parties], they are concentrating on the powers – how the powers are going to be divided between the president, vice president and prime minister," he told AA. "At the grassroots here, people are dying; the children fighting are the ones facing new deaths, while these people are dragging the money of South Sudan into their own accounts," Mawir charged. "In the government here, some feel afraid that if they allow themselves to accept peace, they are going to lose; be away from the government," he said. "So everybody wants to buy time so that they will continue to be in their positions," added the activist. Mawir says he has faced "aggression" since asking President Kiir to step down – or fall with the regime – at a recent meeting of government officials and stakeholders close to the Juba peace talks. He asserted, meanwhile, that the rebels were resisting a peaceful settlement while Machar did not control commanders on the ground. "We need them now to make accountability on both sides, Riek's side and the government side, for the military actions that killed people, innocent people," said the activist. Mawir called for reform of the government, the ruling party and the army. "They turned the military into a military of the party, which is very wrong," he said. "Separate the military from the [political] problems," he stated. Abraham Awolic, for his part, director for administration at the Sudd Institute in South Sudan, a local think tank, is skeptical about peace talks. "Both parties want the conflict to end in a particular way that gives them an upper hand, and this may drag out the conflict," he told AA. "The regional body [IGAD] is also interested in seeing the conflict end in a particular way," Awolic insisted. "The international community, too, wants the conflict to end in a particular way." He believes that the conflict revolves primarily around issues of power sharing. "The whole discussion is reduced to how much power is given to rebels and how much power goes to the government," Awolic said. "This makes it difficult to reach a final agreement," he added.

The researcher asserted that each side's desire to have the lion's share of authority could delay a peace deal. Ateny Wek Ateny, the presidential spokesperson, insisted that the government was seeking a peaceful solution. "I want to assure the public that the government is doing its best to restore peace," he told AA. "The government needs peace, but the rebels do not accept [it]; they keep violating the cease-fire agreements. Peace cannot be brought by one party when the other party does not want it" the spokesman claimed.

Rebel representatives were not immediately available to comment on the spokesman's assertion. Professor Biong, for his part, fears that failure to reach peace could have far-reaching ramifications for the nascent country. "What is alarming is that if they [the warring parties] don't agree, then IGAD countries will not only impose sanctions, but also intervene without reference to the warring parties to protect life and restore peace and stability," he told AA. He expected anti-peace elements on both sides of the conflict to exploit South Sudan's dry season to provoke more confrontations. "There is a likelihood that the international community, if we are not careful, can take this [as justification] to intervene," Biong told AA. "We should definitely not agree to any [foreign] intervention," he stressed. "This is going to take away our pride, our sovereignty and our dignity, especially after the long war we have fought [for independence]," he underlined.

South Sudan seceded from Sudan in 2011 after one of Africa's longest civil wars. "We have the possibility of having a foreign government coming into South Sudan," Biong said. "It is very important that we avoid this by all means." The university professor nevertheless remains optimistic. "The people of South Sudan are going to achieve peace, whatever happens," he told AA.