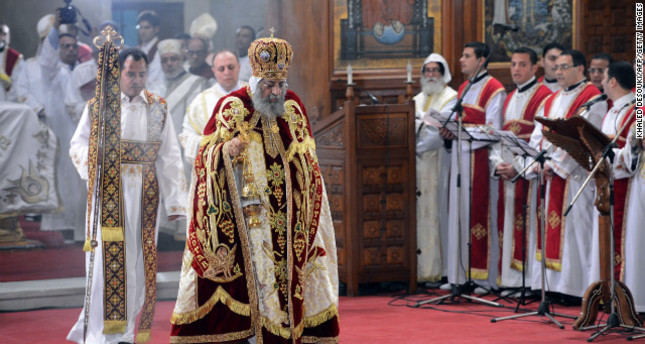 The Pope of the Coptic Orthodox Church of Alexandria Tawadros II, who supported the ouster of Egypt’s first democratically elected president, accused the Egyptian military of killing Copts in church attacks

Egyptian media reported that the Pope of the Coptic Orthodox Church of Alexandria, Tawadros II, criticized the Egyptian army over the lack of protection for Copts during attacks on the churches that took place in 2011. Pope Tawadros went further, accusing the army of being involved in the killing of Coptic Christian citizens. In a visit to different churches marking the end of the year, he replied to a question regarding the 28 deaths and 212 injuries sustained mostly by Coptic protesters in 2001, saying: "No one can deny that this incident was a crime, and the people connected to it are still demanding their rights. … The Maspero clashes of 2011 are horrifying and undeniable incidents that are equally shocking as the Two Saints Church bombings in 2011 on New Year's Eve," he said. Pope Tawadros had previously accused the army and had erected a statue to commemorate those killed in the massacre. The statue included a plaque inscribed with the names of the victims and an epitaph that reads: "Here are the bodies of those martyrs killed on Oct., 9 2011 by the bullets and tanks of the Egyptian army during a peaceful protest in front of the headquarters of the Egyptian state television station." Last month, Pope Tawadros told Al-Hayat television channel that it was not wise to raise the issue of the Maspero clashes as the current circumstances in Egypt did not allow for it, as the army and police are currently under pressure. His statements drew heavy criticism from non-governmental organizations and human rights activists. The spokesman for Judges for Egypt, lawyer Walid Sharabi, said that it was the Church that destroyed the lives of the Christian victims through its alliance with the army. Sharabi wrote on his Facebook page: "Mina Daniel and his colleagues who were killed when they went out for a peaceful demonstration did not know that the Church is strongly in love with the army."

On Oct. 9 2011, 27 Coptic protesters were killed when a peaceful march against the destruction of a church in Aswan and the authorities' subsequent inaction was confronted by the military police at the state radio and television building at Maspero in downtown Cairo. At least 28 Coptic Christians were killed while 212 others were injured.

Pope Tawadros is now accusing the army as he had accused Egypt's first democratically-elected President Mohammed Morsi, of not defending Coptic Christians. He had said Morsi had failed to protect the building. Tawadros said Morsi had "promised to do everything to protect the cathedral but in reality we do not see this." He said the failure to do so "comes under the category of negligence and poor assessment of events. … We need action not only words. … There is no action on the ground," he said, adding, "the Egyptian Church has never been subject to such [attacks] even in the worst ages." On the election of Abdel-Fattah el-Sissi, who led the bloody military coup and became president after leaving the army, Tawadros said: "Egyptians see him as a savior and the hero of the June 30 revolution. There was a moment of consensus and cohesion on the need to end the period of Muslim Brotherhood rule."