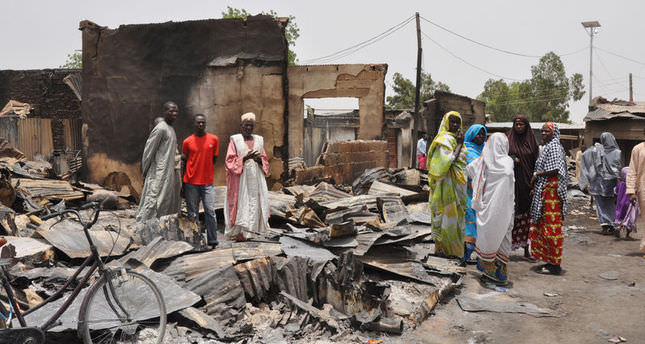 The extremist group in Nigeria continued to horrify the world with its latest deadly attacks. The death toll allegedly hits 2,000 as Turkey and the EU condemned the violence while expressing concern over fatalities

Nigeria has been dragged into a major crisis as the extremist group in Nigeria, Boko Haram, has been continuing its violent acts unabated in the northern part of the country. The militants have carried out various deadly attacks in Nigeria's northeastern state of Borno for the last five days. The group continues to kill hundreds as the death toll has reportedly reached 2,000. The town of Baga, located close to Nigeria's border with Chad, has been under attack.

Boko Haram has been trying to seize power in northern Nigeria and bordering Cameroon and Chad to build an Islamic state.

President Recep Tayyip Erdoğan strongly condemned the radical group's deadly assault in a written statement stressing that Turkey opposes terrorism in all forms. "The latest attacks reveal that we need to take immediate action to turn the world into a peaceful place where the fear of others and hate speech come to an end," he said.

"We learned with great sorrow of the terrorist attacks carried out by Boko Haram in Nigeria's town of Baga, which caused the death of thousands. We strongly condemn these brutal acts. We will continue to stand by the friendly and brotherly people of Nigeria," the Turkish Foreign Ministry said in a written statement. The High Representative of the EU for Foreign Affairs and Security Policy and Vice President of the European Commission Federica Mogherini also expressed shock over the deadly attacks.

Boko Haram's mass abduction of more than 276 girls from a boarding school in Chibok in the northeastern state of Borno on April, 14 has led to great indignation and sparked world-wide protests. The girls remain captive and the group still threatens to keep up abductions mainly targeting girls. A few of the abducted girls who managed to escape told Human Rights Watch, an international human rights organization, that "they and many other female captives were subjected to abuses including forced marriage and rape." U.N. Secretary-General Ban Ki-moon made a personal appeal on Thursday to Boko Haram and all other extremist groups to free the hundreds of children they have abducted.

Nigeria, the most populous and the richest country in the region, one of the biggest oil producers in the world, have been suffering from violent attacks of the radical group. Boko Haram has been active since 2002 as their actions has become more apparent since 2009 after the death of their founding leader, Mohammed Yusuf. He first established a religious complex that included a mosque and a school where many poor families across Nigeria and from neighboring countries enrolled their children. The group has officially adopted the name "the Group of the People of Sunnah for Preaching and Struggle" but in the town of Maiduguri, where the group was formed, the residents dubbed it Boko Haram, loosely translated, "Western education is sinful," which would symbolize its strong opposition to anything Western corrupting Muslims.

"Boko Haram leader Mohammed Yusuf and many members were arrested in 2009 and killed in a brutal way while in police custody without standing court, this incident created a stronger Boko Haram and increased its followers," said Mufutau Olaleye on last May, a Nigerian journalist and consultant on African affairs. "The group later became violent but only against the government misrule and corruption of police not Nigeria's people," he added. Amnesty International accused the Nigerian government in 2013 of human rights abuses after 950 suspected Boko Haram militants died in detention facilities run by Nigeria's military Joint Task Force. "There are many Boko Harams now, the name had spread around and a lot of groups have used it after they launch attacks they say we are Boko Haram, there are even Christian groups calling themselves as Boko Haram!" Olaleye told Daily Sabah. Boko Haram as a name later spread to northern Nigeria, northern Cameroon, southern Niger and Chad. The first attack that carried the Haram name was in Borno, January 2011. It resulted in the death of four people. More than 1,500 people have been killed this year alone in attacks blamed on Boko Haram insurgents, most of which have taken place in the northeastern Nigeria.

Boko Haram has a strong emotional bond with Al-Qaeda regarding the similarities in the way they operate. The increasing number of young men living in northern Nigeria has affinity with the militant group and become radicalized. In a statement released by the group in last August, e leader of the Nigerian militant group, Abubakar Shekau, claimed that they will rule with a "caliphate" system and will take the northeastern town of Gwoza as its capital. "Thanks to Allah who gave victory to our brethren in [the town of] Gwoza and made it part of the Islamic Caliphate," Shekau said.

The central government power is extremely weak to control the north as northern states are under strict control of powerful tribes which creates a suitable environment for militant group to spread across the country. The absence of political authority contributes the Nigerian youth nothing but to join radical groups as to leading more young man to increase their affinity with Boko Haram and to becoming more radicalized. Amnesty International has claimed that the Nigerian government is insufficient to prevent the group's organizations. For instance, the international group has claimed that the government new about the planned kidnapping of over 200 girls by the militants.

The group was condemned by both local and international religious organizations. The Islamic Circle of North America, the Muslim Council of Britain, the Organization of Islamic Cooperation and the Council on American Islamic Relations have all condemned the group's actions, while The Grand Mufti of Saudi Arabia Sheikh Abdulaziz Al al-Sheikh, a Sunni cleric, has described Boko Haram as misguided and intent on smearing the name of Islam.

Why Boko Haram cannot be prevented from carrying out the terror attacks remain unanswered. It is known that many international powers including Israel, the U.S., the UK and France help Nigerian government to tackle the group. For instance after the abduction of the 200 girls, Nigerian President Goodluck Jonathan accepted an offer from U.S. President Barack Obama to deploy U.S. security personnel and assets inside Nigeria with the ostensible aim of rescuing the abducted girls. On May 18, the U.K. sent a reconnaissance aircraft to Nigeria to support the international search for the abducted girls. Meanwhile a team of British experts are in Abuja to support the Nigerian government in its response to the abduction the British Foreign Office has announced. On May 20 Israel sent intelligence experts to Nigeria. The team included people experienced in dealing with hostage situations. Another Israeli counterterrorism team is due to arrive in Nigeria in the next few days to join the search in the country's northeast Borno State, the Nigerian presidency announced. According to the statement by Presidential Spokesman Reuben Abati, President Jonathan had an extensive discussion with his Israeli counterpart Benjamin Netanyahu who conveyed his country's sympathy and offer of support for Nigeria. France also offered its help to the Nigerian government by sending experts and holding a summit on Boko Haram in Paris. World leaders and the Nigerian president took part in the summit after he cancelled a visit to the abducted girl's village for security concerns according to a government spokesman.