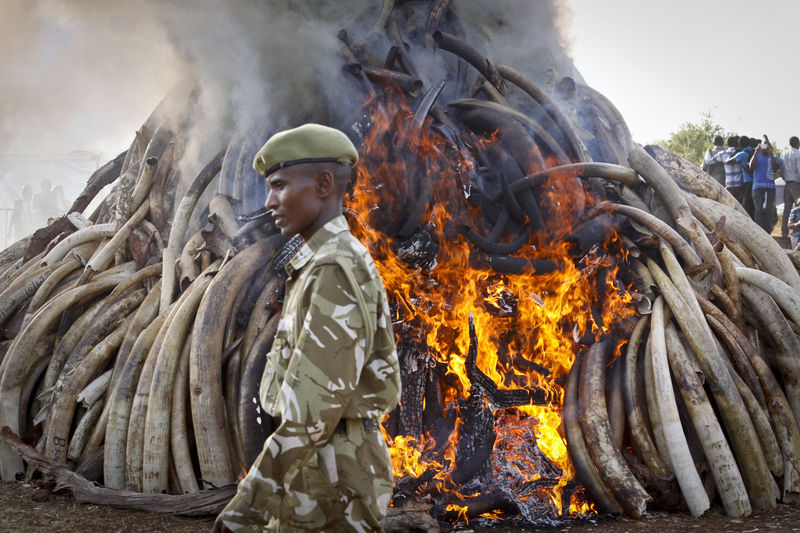 by Associated Press Mar 04, 2015 12:00 am
Kenya's president set fire to 15 tons of elephant tusks during World Wildlife Day Tuesday to discourage poaching and trade in ivory.

Twenty-five years since ivory trade was banned, new demand from emerging markets threatens Africa's elephants and rhinos, President Uhuru Kenyatta said at the event. African countries are concerned about the scale and rate of the new threat to endangered wildlife species, he said.

"Many of these tusks belonged to elephants which were wantonly slaughtered by criminals. We want future generations of Kenyans, Africans and the entire world to experience the majesty and beauty of these magnificent beasts. Poachers and their enablers will not have the last word," Kenyatta said before setting a blaze an almost 10 feet high pile of huge elephant tusks doused with petrol.

Higher demand for ivory is fueling elephant killings by poachers across Africa. Save The Elephants said last year that 100,000 elephants were killed in Africa between 2010 and 2012. On Thursday, China imposed a one-year ban on ivory imports amid criticism that its citizens' huge appetite for ivory threatens the existence of Africa's elephants.

Save the Elephants founder, Ian Douglas Hamilton, said research released by his organization showed that the price of elephant ivory has tripled in China since 2010.

Hamilton said Kenya has a long way to go before it can be clear of the poaching menace. The elephant populations in Tanzania, Gabon, Cameroun, Central African Republic, Mozambique, Republic of Congo and Congo are the worst hit by poaching, he said.

"We would like to tell the world to stop the trade in ivory because it is destroying our economy, our heritage, our environment," said Paul Udoto, a spokesman for the Kenya Wildlife Service.
Last Update: Mar 04, 2015 10:07 pm
RELATED TOPICS