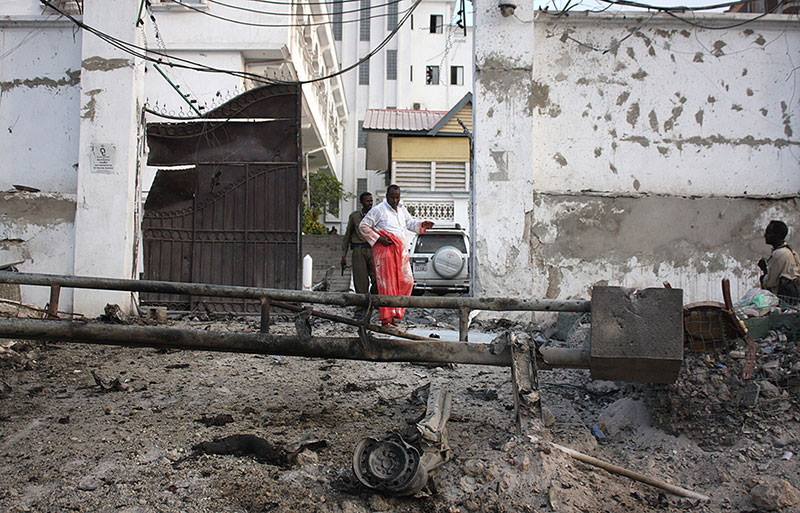 | Photo: AA
by Daily Sabah with AFP Mar 27, 2015 12:00 am
The death toll in a gun and bomb attack by Somalia's Al-Qaeda-affiliated Shabaab militants on a Mogadishu hotel used by the country's leaders has risen to 14, police said Saturday.

The war-torn country's ambassador to Switzerland was among the dead in Friday's dramatic assault on the Maka al Mukarama hotel, which is used by politicians, diplomats and businessmen, officials said.

Police said that in addition the last of five rebels who had barricaded themselves into the first-floor of the hotel, where security is usually tight, was killed early on Saturday.

Officials had said Friday that at least 10 people died after a car bomb went off outside the hotel before it was stormed by heavily armed gunmen.

Police later claimed to have the situation under control, although spokesman Kassim Ahmed Roble said Saturday that fighting had gone on all night.

"The operation to eliminate the attackers which took all night is now over," he said. "The last five attackers barricaded into the first floor were killed this morning."

"Fourteen people were killed and 13 others wounded in the attack," Somali Information Minister Mohamed Abdi Heyr Mareye told reporters at the scene on Saturday.

"The terrorists attacked the hotel with a car filled with explosives and five to six rebels got into where the leaders and diplomats were," he added.

Shabaab spokesman Abdulaziz Abu Musab confirmed that the militants were behind the attack and said they had managed to quickly seize control of the hotel.

"The mujahedeen fighters are conducting an operation targeting the heads of the apostates in Mogadishu," he told AFP on Friday, adding that members of Somalia's internationally backed government were meeting inside at the time of the raid.

A car bombing followed by an armed raid has become a trademark tactic of the hardline extremists, who are fighting to overthrow the Mogadishu government and eject African Union forces supporting it.

The terrorist group Al-Shabaab pledged allegiance to the militant organization Al-Qaeda in 2012. As of 2013, the group has retreated from the major cities, but imposes strict forms of Sharia law in some rural regions. Al-Shabaab's troop strength was estimated at 7,000 to 9,000 militants in 2014.