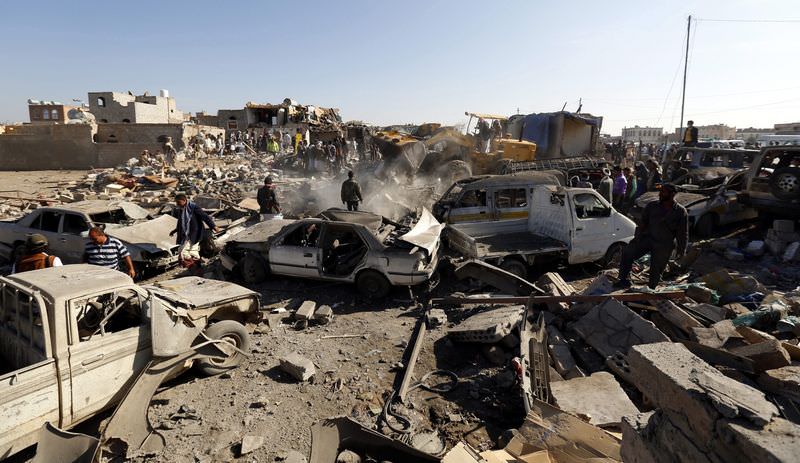 Yemeni President Abd-Rabbu Mansour Hadi called on the army on Saturday to protect state institutions and carry out the orders of the "legitimate leadership", and also blamed Iran for backing the Houthis in their attacks in Yemen as the Arab military campaign against his Houthi militia enemies continued.

"Your responsibility today is preserving security and stability, protecting state institutions … and carrying out the orders of your legitimate leadership," Hadi told a meeting of Arab heads of state at an Arab League summit in Sharm el-Sheikh, Egypt.

"I tell Iran's puppet ... 'You are the one that destroyed Yemen with your political immaturity'," Hadi said in Sharm el-Sheikh.

Tehran denies providing money and training to the Shi'ite Houthi fighters, as alleged by some Western and Yemeni officials.

Hadi said a campaign against the Houthis, led by Saudi Arabia, was aimed at protecting Yemenis from "failed aggression". Saudi King Salman said on Saturday that the country's military campaign in Yemen against Houthi fighters would continue until its targets are achieved. Saudi Arabia deployed 100 fighter jets, 150,000 soldiers and other navy units on Thursday, after it launched its operation against the Houthi rebels in Yemen.

In the capital Sanaa, which has been under Houthi control since September, warplanes carried out a third night of strikes on Friday, targeting an airport, residents and an official said.

A United Nations source said more than 100 international U.N. staff were being evacuated and were expected to relocate to several countries including Jordan.

U.S. President Barack Obama spoke with Saudi King Salman on Friday and reaffirmed support for the military action taken in Yemen by Saudi Arabia and its Gulf Arab allies.

Obama and King Salman agreed that their goal is to achieve lasting stability in Yemen through a negotiated political solution, the White House said in a stament. Obama also underscored his commitment to Saudi Arabia's security.