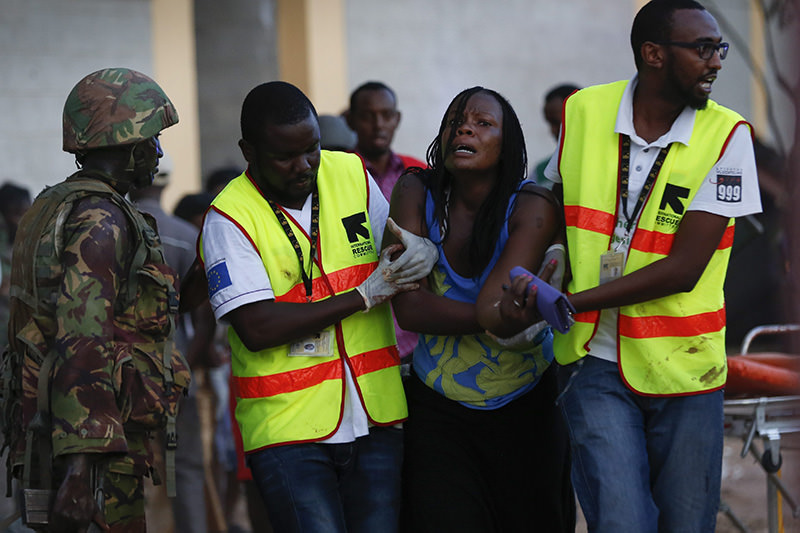 | EPA Photo
by German Press Agency - DPA Apr 03, 2015 12:00 am
The Somali terrorist group al-Shabaab on Friday warned of new attacks in Kenya, a day after it attacked a university campus killing 147 people.

"There will be no more safe place for Kenyans as long as their troops are in Somalia," al-Shabaab spokesman Sheikh Ali Mohamud Rage told pro-insurgent radio Andalus.

He was referring to Kenya's participation in a 20,000-strong African Union force helping the Somali government battle al-Shabaab.

"You will see more deadly attacks in your country, Kenya," Rage said.

The al-Shabaab spokesman said the militants who attacked the Moi University campus in Garissa, some 350 kilometres east of Nairobi, singled out Christians to kill.

The attackers "released a number of Muslim students as they were storming the university and killed many Christians inside the university," Rage said, confirming witness accounts that people who were unable to answer questions about the Koran were shot dead.

Kenya, meanwhile, has been mourning the victims as the Red Cross sought blood donations for some of the 79 people who were injured in the terrorist attack - the worst by al-Shabaab so far.

Many of the injured and the dead were flown to Nairobi, where family members were invited to collect bodies at a mortuary.

At least four gunmen stormed the university campus at dawn, killing two guards and then gunning down students in dormitories, as well as others trying to escape.

Some students said they were spared because they could recite verses from the Koran.

"They stood in the main path from the hostels, asking questions about Islam and the prophet. It was scary, because Islam doesn't teach about killing those who don't know about the teachings," the newspaper Daily Nation quoted student Hassan Abdi as saying.

Security forces cornered the attackers into one dormitory where they were holding hostages.

Kenya offered a reward of 20 million shillings (212,000 dollars) for the suspected mastermind of the attack, Mohamed Dulyadayn.

Police imposed an overnight curfew in Garissa and nearby counties until April 16.

In Washington, the White House extended condolences to the families of the victims, while African Union spokeswoman Nkosazana Dlamini Zuma said she was "appalled by such a barbaric act."

The terrorist attack was the worst in Kenya since the 1998 bombing of the US embassy in Nairobi, which killed more than 200 people.

Al-Shabaab has frequently targeted Kenya over its participation in the military campaign against it. The siege of a Nairobi shopping mall that cost 67 lives in September 2013 has been followed by smaller attacks mainly on the Kenyan coast.

The militant group al-Shabab, meaning "the Youth" in Arabic, battles the U.N.-backed government in Somalia, and launches deadly attacks in neighboring Kenya. The group attracts East Africans as well as around 100 fighters from North African countries, the U.S. and Europe. In total, it is estimated that around 7,000 fighters have joined the militant group so far.
Last Update: Apr 03, 2015 4:35 pm
RELATED TOPICS