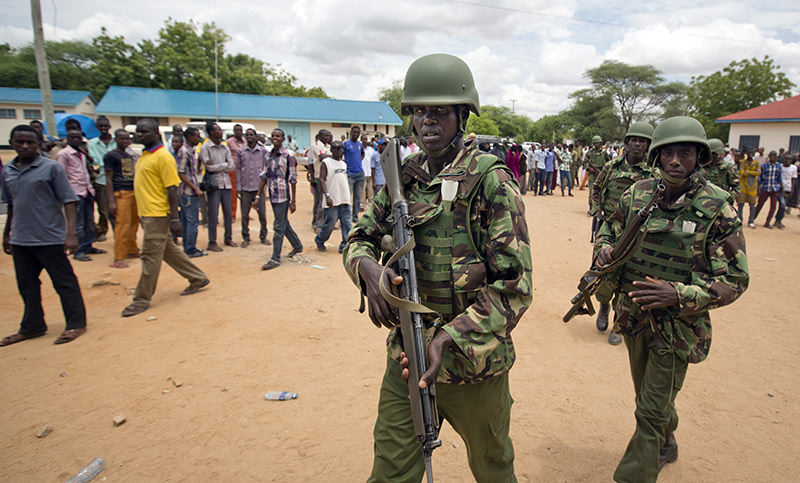 Kenya Defence Forces (KDF) soldiers arrive at a hospital to escort the bodies of the attackers to be put on public view, in Garissa, Kenya (AP Photo)
by German Press Agency - DPA Apr 06, 2015 12:00 am
The Kenyan air force has announced they have destroyed two al-Shabaab camps in Somalia, an army spokesman said on Monday.

"We engaged yesterday and also this morning. We did aerial confirmation, the air images have been analyzed and show the camps were destroyed," he said.

The spokesman declined to comment on reports that an al-Shabaab commander was killed in the strikes.

"There were indications that some of the injured people were taken to a nearby town called Baredhere, but it was not easy to confirm exactly the casualties, because we did not have a ground force," he added.

Reports that the strikes had only hit farmland instead of military camps were dismissed by Obonyo as propaganda.

"They know the casualties they have suffered. We have intelligence information that confirmed these were indeed Al-Shabaab operational bases. The assessments and target analysis we did before the strike confirm it. That is normally how we do it, it is based on credible intelligence," he said.

Meanwhile, security was being boosted in Kenya after the government was accused of a slow response to Thursday's university attack, during which al-Shabaab militants terrorized a campus in Garissa, 350 kilometres north-east of Nairobi for 16 hours, gunning down students who they identified as Christians.

The siege ended with the deaths of four terrorists who were killed by security forces or blew themselves up.
Last Update: Apr 06, 2015 6:34 pm
RELATED TOPICS