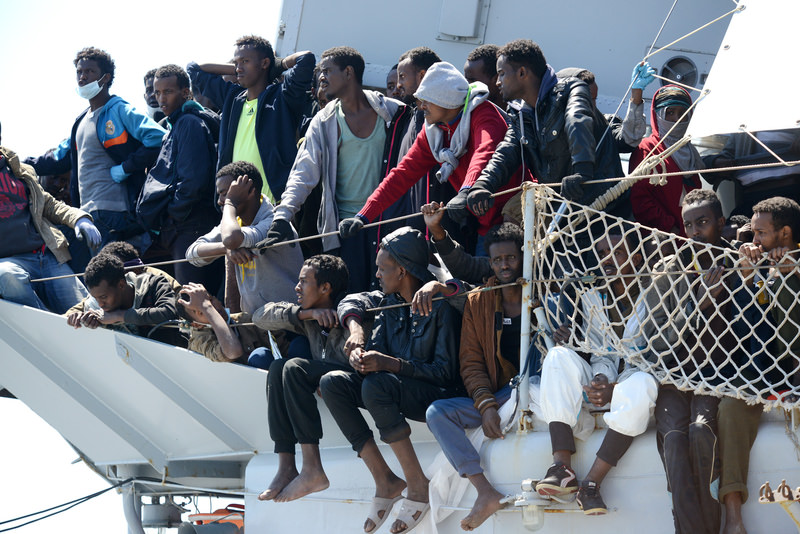 With the illegal migration and human trafficking crisis becoming a crucial international issue, Libya has drawn attention not just because of the ongoing turmoil in the country but because of it status a major hub for people smugglers committing human rights violation. The illegal transportation of migrants and refugees departing the Libyan coast have led to the loss of more than 1,600 lives over the last seven days and the reported migrant fatalities in the Mediterranean Sea are feared to be on the increase as more than 1 million people are waiting to reach European shores via Libya.

The shores of Libya are only about 300 kilometers from Lampedusa, the southernmost island of Italy now sheltering thousands of illegal migrants. The North African country has 1,770 kilometers of coastline and 5,000 kilometers of porous land borders in mostly arid areas that are sparsely populated.

During Muammar Gaddafi's one-man rule, the Libyan authorities were unable to fully control their frontiers, with hundreds of people crossing them daily from sub-Saharan Africa via Sudan, Niger and Chad. Colonel Gaddafi used immigration to put pressure on Europe, opening and closing gates to migrants depending on the state of relations with EU members, notably former colonial power Italy.

Gaddafi, who was ousted from power in Libya's 2011 uprising, used to claim 5 billion euros per year from Europe for border surveillance and the fight against people smuggling.

Between 2008 and 2011, the flow of illegal migrants from Libya to Europe dried up after the signing of a treaty with Rome. However, following the toppling of Gaddafi's 42-year rule, Libya has once again emerged as a hub for smugglers who operate with impunity. Libya has long been suffering from the chronic absence of security and order, with numerous attacks, kidnappings and crimes. The central government does not wield enough power to save the country from long-lasting political instability and violence, as it lacks security control over the country's borders.

Apart from the ineffectiveness of the central government to provide security across Libya, many militias groups loyal to either the Tobruk government or the Tripoli government have made great sums of money from cooperating with people smugglers as they allow them to pass through their territory. Therefore, Libya has become the major port favored by smugglers for illegal immigration as there are no control or security checks at the border.

The main source of the illegal migrants is northern Niger, a stronghold of trafficking networks. According to the International Organization for Migration (IOM), 88.3 percent of Nigerien expatriates head to Burkina Faso, Nigeria, Cote d'Ivoire as a first destination and then Libya, which serves as a gateway to Europe. This follows African refugees from violence-hit Somalia and Eritrea residing in U.N. refugee camps, with the ultimate goal of reaching Europe's borders where they can take shelter in peace.

The increasingly violent and chaotic situation in the Middle East has led many people to flee the conflict in an attempt to seek security and shelter in more prosperous and peaceful countries in Europe. Over 218,000 refugees and migrants arrived in Europe via the Mediterranean in 2014, as indicated by the U.N. More than 110,000 migrants crossed through Libyan territory in 2014 alone, according to U.N. figures. These numbers have been gradually increasing as hundreds of immigrants hope to reach the European shores of Italy, Malta, Spain, Greece and Cyprus. Over 35,000 migrants have arrived by boat in southern Europe so far since the beginning of this year, according to figures released by the United Nations refugee agency.
Last Update: Apr 23, 2015 11:13 am
RELATED TOPICS