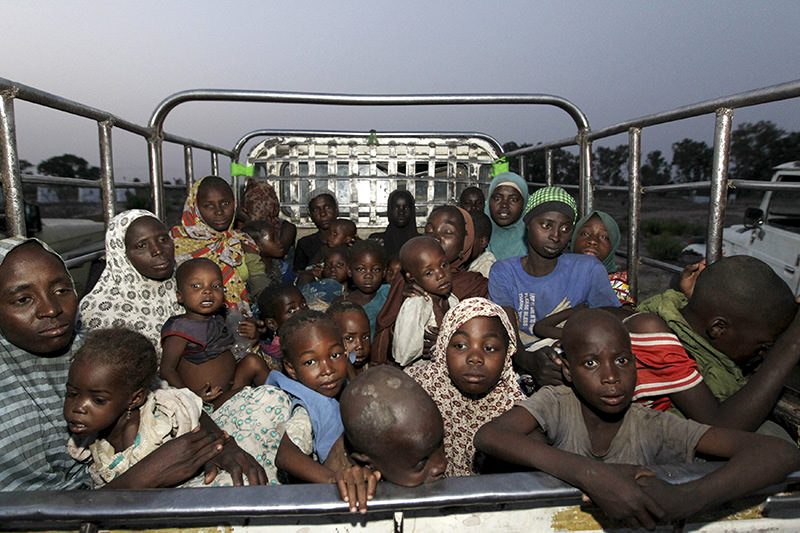 Women and children rescued from Boko Haram in the Sambisa forest by the Nigerian military arrive at an internally displaced people's camp in Yola, Nigeria, May 2, 2015 (Reuters Photo)
by Daily Sabah with Reuters May 04, 2015 12:00 am
The Nigerian army rescued hundreds of women and children, with heads or limbs in bandages, last week from the extremist group Boko Haram in a major operation in northern Nigeria.

After days on the road in pickup trucks, hundreds were released on Sunday into the care of authorities at a refugee camp in the eastern town of Yola, to be fed and treated for injuries. The freed captives spoke to reporters for the first time.

"They didn't allow us to move an inch," said one of the freed women, Asabe Umaru, describing her captivity. "If you needed the toilet, they followed you. We were kept in one place. We were under bondage.

"We thank God to be alive today. We thank the Nigerian army for saving our lives," she added.

Nearly 700 kidnap victims have been freed from Boko Haram's forest stronghold since Tuesday, with the latest group of 234 women and children liberated on Friday.

"When we saw the soldiers we raised our hands and shouted for help. Boko Haram, who were guarding us, started stoning us so we would follow them to another hideout, but we refused because we were sure the soldiers would rescue us," Umaru, a 24 year-old mother of two, told Reuters.

The prisoners suffered malnutrition and disease, she said. "Every day we witnessed the death of one of us and waited for our turn."
Another freed captive, Cecilia Abel, said her husband and first son had been killed in her presence before the militia forced her and her remaining eight children into the forest.

For two weeks before the military arrived she had barely eaten.
"We were fed only ground dry maize in the afternoons. It was not good for human consumption," she said. "Many of us that were captured died in Sambisa Forest. Even after our rescue about 10 died on our way to this place."

Amnesty International estimates the extremist militants have taken more than 2,000 women and girls captive since the start of 2014. Many have been used as cooks, sex slaves or human shields.

The prisoners who have been freed so far do not appear to include any of the more than 200 schoolgirls snatched from school dormitories in Chibok town a year ago, an incident that drew global attention to the six-year-old insurgency.

Even though there are varying figures for the numbers of people killed by Boko Haram since it began its insurgency in 2009, the available data suggests that as few 9,000 and as many as 17,500 people have died.
Last Update: May 04, 2015 1:11 pm
RELATED TOPICS