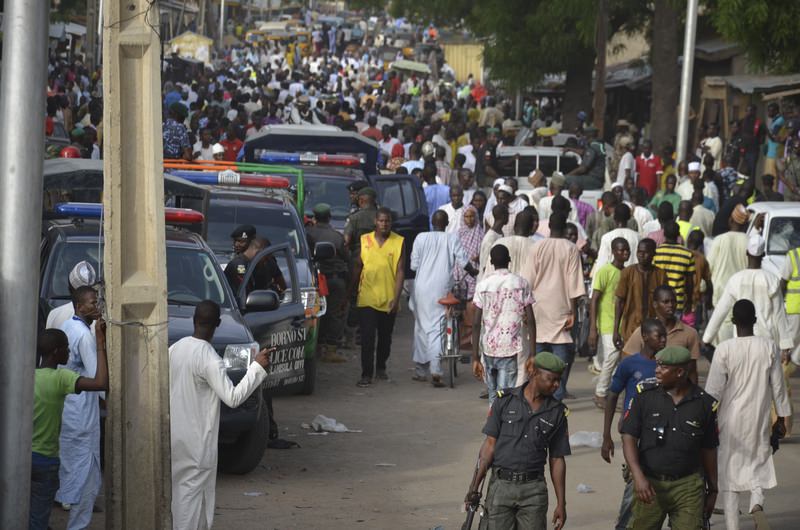 People throng the streets near the site of another explosion in Maiduguri, Nigeria, Saturday, May 30, 2015 (AP Photo)
by Jun 02, 2015 12:00 am
A bomb blast hit a busy meat market in Nigeria's northeastern city of Maiduguri on Tuesday, killing as many as 50 people, an eyewitness and a hospital source told Reuters.

The bomb which was concealed under a butcher's table in the market went off at around 1pm local time, killing shoppers and travelers, a military source said.

Nobody has claimed responsibility for the latest explosion, which follows two bomb attacks over the weekend that killed at least 30 people and bore the hallmarks of militant group Boko Haram.

The group, which new President Muhammadu Buhari has vowed to crush, has killed thousands of people and displaced around 1.5 million in the northeast of Africa's biggest economy and top oil exporter.

Lawal Kawu, a paramedic, said 31 charred bodies had been evacuated to the teaching hospital in Maiduguri, and several other people were brought in with severe injuries.

"It shook our school building and I had to run away. I saw military vehicles with soldiers moving toward the area," Abubakar Mohammed, a college student few meters away from the blast scene told Reuters.

The group is showing a return to its guerrilla tactics since losing the territory it gained in 2014 after successful offensives by Chadian, Nigerien and Nigerian troops over the past few months. It maintains a last stronghold in the Sambisa forest reserve.