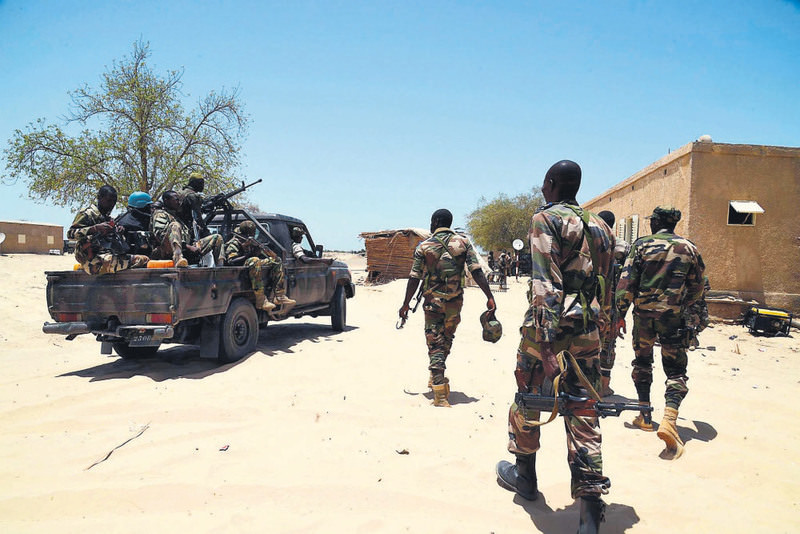 Nigerien soldiers patrol the Nigerian border near the south eastern city of Bosso.
by Daily Sabah with Wires Jun 05, 2015 12:00 am

An amnesty International report revealed crimes against humanity in Nigeria where more than 7,000 people died of starvation, suffocation or torture while detained by the Nigerian military

The Nigerian army has committed war crimes with at least 7,000 people dead in military detention from torture, starvation, disease or execution, Amnesty International said in a report titled "Stars on Their Shoulders. Blood on their Hands." The U.K.-based rights organization urged the Nigerian government to take immediate action to investigate atrocities committed by the military. The report reveals that nine senior officials from the Nigerian military had "full knowledge of the arbitrary detentions and high rates of deaths and failed to take action to stop these human rights violations."

In a 133-page report, the rights group said at least 20,000 young men, some only nine years old, in north-east Nigeria were arrested on suspicion of being Boko Haram members. They have reportedly been subjected to abduction and torture in detention, revealing war crimes and crimes against humanity committed by Nigerian military.

"The hundreds of unidentified bodies, the evidence of mass graves and the harrowing stories of starvation and abuse coming out of the country's military barracks demand nothing less than an urgent investigation and for those responsible to be brought to justice," said Salil Shetty, Amnesty International's Secretary General.

Nigeria's new president, Muhammadu Buhari, on Wednesday promised to look into an Amnesty International report urging the International Criminal Court to probe senior military officers for war crimes in the battle against Boko Haram. "I assure you that your report will be looked into," an official statement quoted Buhari as saying in Niger's capital Niamey, in his first reaction to the report. "This administration will leave no stone unturned to promote the rule of law and deal with all cases of human rights abuses," he said in the statement issued by his spokesman, Shehu Garba.

Nigeria, the most populous and richest country in the region, and one of the largest oil producers in the world, suffers from some of the worst levels of economic inequality in the world. There is a stark contrast between the Christian south of the country and the Muslim north, which suffers from poverty, low employment rates, a lack of education opportunities and access to health care. The central government's power is extremely weak and largely unable to govern the north where powerful tribes maintain strict control.

The conflict intensified in the northern part of the country, according to a report released by the Project for the Study of the 21st Century think tank. The growing radicalization in northern states is seen as a crucial threat to both the future of Nigeria and global security. The country has been mired in a major crisis as Boko Haram has been continuing its violent acts unabated in the northern part of the country. The militants have carried out various deadly attacks in Nigeria's northeastern state of Borno, which has resulted in more than 2,000 deaths in only five days.
RELATED TOPICS