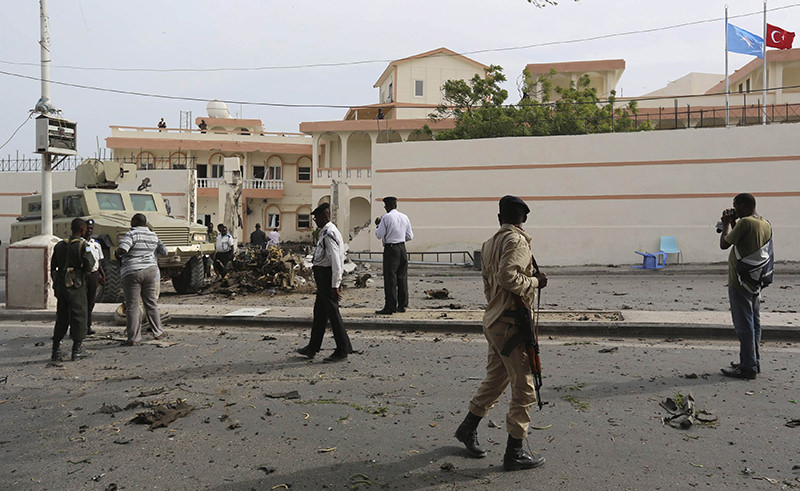 Somali government soldiers and African Union Mission in Somalia (AMISOM) peacekeepers secure the scene of a suicide car explosion in front of the SYL hotel in the capital Mogadishu on January 22, 2015
by Daily Sabah with Wires Jun 24, 2015 12:00 am
At least three people have been killed, seven wounded by a car bomb targeting military vehicle near the UAE embassy in Somali capital.

A loud explosion followed by gunfire was heard near the UAE embassy in Somalia's capital Mogadishu, on Wednesday.


The terrorist group al Shabaab claimed responsibility for the attack and said it carried out the attack and "inflicted casualties" without giving details.

"The car bomb targeted UAE trainers in a bulletproof car. They are all safe," captain Afrah told Reuters.

"A suicide bomber rammed his car into the pickup truck and there were casualties," said security official Abdi Dahir. "There was a heavy explosion."

One witness said they had seen two dead bodies following the attack, which took place near the embassy of the United Arab Emirates.

A military convoy from the African Union force in Somalia (AMISOM) was also passing nearby at the time of the attack, witnesses said, and it was not clear what the exact target had been.

"I saw the dead bodies of two people, and there were several wounded soldiers," said Abdulahi Yasin, who saw the aftermath of the attack.

"The explosion was very heavy and it destroyed the pickup truck," said Hassan Bile, another witness.

Somalia's Al Qaeda-linked al Shabaab insurgents have in the past claimed responsibility for such attacks. On Sunday, the group's fighters detonated a car bomb in the capital and shot their way into a national intelligence agency training site.

A suicide car explosion was carried out in front of the SYL hotel in the capital Mogadishu January 22, 2015. The terrorist group al Shabaab claimed responsibility for the bomb attack at the gate of the hotel where Turkish delegates were meeting a day ahead of a visit by their president, Tayyip Erdoğan, to the Somali capital.