Europeans switch to Spain, Bulgaria and Greece after Tunisia attack 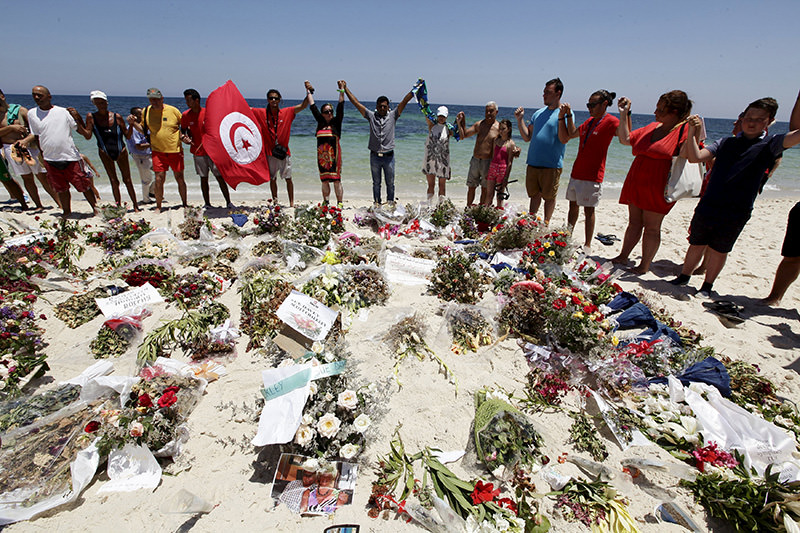 People join hands as they observe a minute's silence in memory of those killed in a recent attack by a gunman, at a beach in Sousse, Tunisia July 3, 2015 (Reuters Photo)
by Daily Sabah with Reuters Jul 05, 2015 12:00 am
Sun-seeking Europeans are switching to destinations such as Spain, Bulgaria or even Greece for holiday this year, with safety concerns in Tunisia after a gunman killed dozens of tourists.

Tunisia's tourism industry had been recovering after the Arab Spring unrest, and had become a popular lower-cost beach holiday spot for Europeans. Last year, 2.8 million travelled there, rebounding back towards 3.8 million level seen in 2010 before the uprising, according to official statistics.

But last week's attack - in which 38 people were killed by a gunman at a beach hotel, mostly Britons - added to security fears raised after a massacre at the Bardo museum in March, when two gunmen opened fire on tourists.

Now many tourists who had planned or booked Tunisian trips are looking elsewhere.

"It's clear that some tourists will now change Tunisia for continental Spain or the Canary Islands, but they will have to pay more," said Juan Molas, chairman of the Spanish Hotel Federation Cehat.

Molas also said Bulgaria and Turkey could prove to be popular, good-value alternatives to Spain.

With its hot weather and good-value package tours, Greece could also be a beneficiary of a tourism switch but a lot depends on this weekend's referendum on the country's bailout terms and the outcome of the debt crisis, said Bob Atkinson, a travel expert at price comparison website TravelSupermarket.

The attacks have dealt a heavy blow to the tourism industry, which contributes between seven and eight percent of Tunisia's GDP.

The sector accounts for 400,000 jobs, directly and indirectly, and is a key source of foreign revenue for a country where the local currency, the dinar, is non-convertible.

The economic impact of the beach bloodbath is likely to exceed half a billion dollars for 2015, according to Tourism Minister Selma Elloumi Rekik.
Last Update: Jul 05, 2015 5:20 pm
RELATED TOPICS