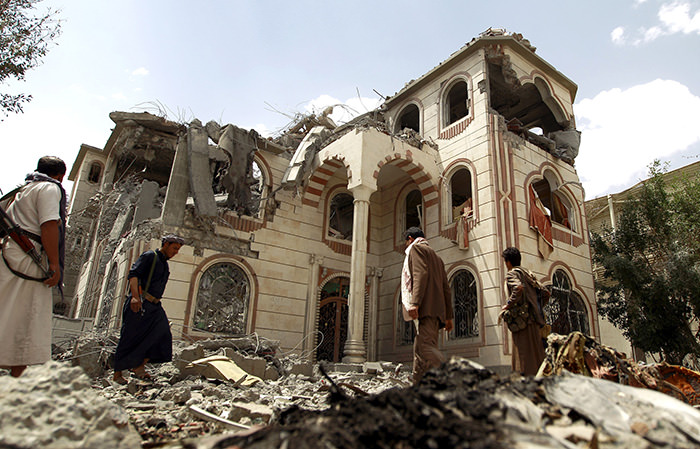 Yemeni armed men walk amidst the debris of a house destroyed in an air-strike by the Saudi-led coalition in the capital Sanaa on July 6, 2015 (AFP Photo)
by Compiled from Wire Services Jul 07, 2015 12:00 am
Arab air strikes and clashes have killed nearly 200 fighters and civilians in Yemen on Monday, residents and media run by the Houthi movement said, in a spike in violence as warring factions discuss a possible humanitarian truce.

The United Nations has been pushing for a halt to air raids and intensified fighting that began on March 26. Almost 3,000 people have been killed since then as the Arab coalition tries stop the Houthis spreading across the country from the north.

The Iran-allied Shi'ite Houthis say they are rebelling against a corrupt government, while local fighters say they are defending their homes from Houthi incursions. Sunni Saudi Arabia says it is bombing the Houthis to protect the Yemeni state.

On Monday, about 63 people were killed in air strikes on Amran province in the north, among them 30 people at a market, Houthi-controlled state media agency Saba said.

In the same province, about 20 fighters and civilians were killed at a Houthi checkpoint outside the main city, also named Amran, about 50 km (30 miles) northwest of the Yemeni capital of Sanaa, local residents said.

Arab alliance war planes also killed about 60 people at a livestock market in the town of al-Foyoush in the south.

Also in the south, residents reported a further 30 killed in a raid they said apparently targeted a Houthi checkpoint on the main road between Aden and Lahj. They said 10 of the dead were Houthi fighters.

Tribal sources in the central desert province of Marib said about 20 Houthi fighters and soldiers fighting alongside them were killed in air raids and gun battles with tribal fighters, who support Yemen's president in exile Abd-Rabbu Mansour Hadi.

On Tuesday, U.N. envoy to Yemen Ismail Ould Cheikh Ahmed continues meetings with Houthi officials in Sanaa to try to broker a ceasefire to allow aid deliveries. One Houthi official said Monday's attacks had dealt a blow to peace efforts.

"Even as the U.N. envoy is present, there are a hundred martyrs and hundreds of wounded ... No truce, no retreat, no surrender. Forward, forward heroes of Yemen, for victory is coming," Yahya Ali al-Qahoom wrote on his Twitter account.

Neither side has offered concessions as civil war rages.

Fighting, bombing and a near-blockade by the Arab coalition has deepened suffering in what is one of the poorest countries in the region.

According to the United Nations, nearly 20 million Yemenis are now in need of humanitarian assistance, which is 78 percent of the entire Yemeni population.

The number of people who need humanitarian assistance in the country increased by 4 million with the Saudi intervention in March 2015, it said.

Fractious Yemen has remained in turmoil since last September, when Houthi militants overran Sana'a from which they have sought to extend their influence to other parts of the country.