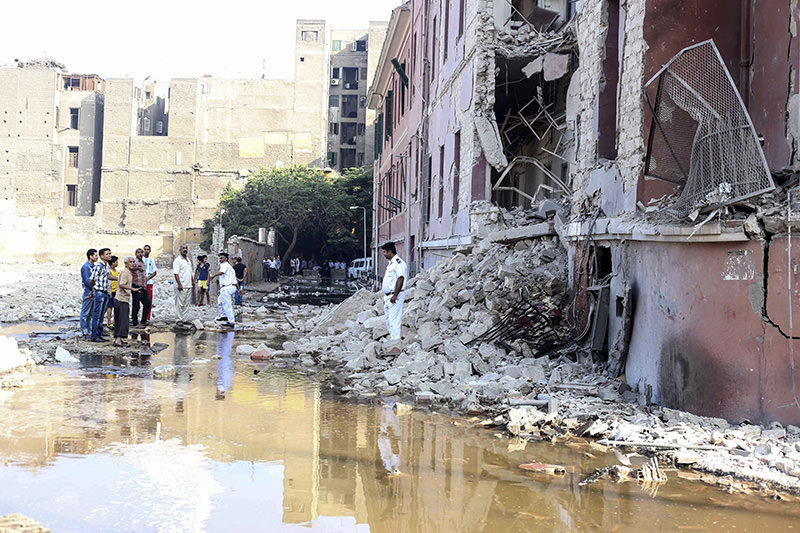 by Daily Sabah with Agencies Jul 11, 2015 12:00 am
An explosion Saturday morning in downtown Cairo killed at least one person and heavily damaged the building housing the Italian Consulate.

Heath Ministry official Hossam Abdel-Ghaffar told The Associated Press that at least one person was killed in the blast.

An Egyptian security official said one civilian and one policeman were also injured. An Italian embassy official said the consulate was closed at the time of the explosion and no staff members were injured. Both officials spoke on condition of anonymity as they were not authorized to brief the media.

The blast ruptured underground water pipes, flooding the area. The security official said the exact cause was still unclear. The state-owned Middle East News Agency quoted a security official as saying investigators are looking into whether an explosive device was placed under a car parked near the building.

The explosion struck one of the busiest intersections in Cairo, a major artery that connects Ramsis Square to the heart of downtown Cairo. Even before 7 a.m. on a weekend in the middle of the Islamic fasting month of Ramadan, the area around the blast would have been crowded with cars, pedestrians and mini-buses.

The explosion reportedly damaged underground water pipes, flooding the area. Meanwhile, the self-proclaimed Islamic State in Iraq and al-Sham (ISIS) has claimed the responsibility for the attack, Reuters reported.

Four journalists on the scene said on Twitter that they were detained by authorities and later let go.

I've been arrested by police

We are being held because we arrived on the scene too fast. :S

We were let go. No problem, just time wasted.

we are currently held by police. I'm with @EfaSheef @degner and @Walt_Curnow .