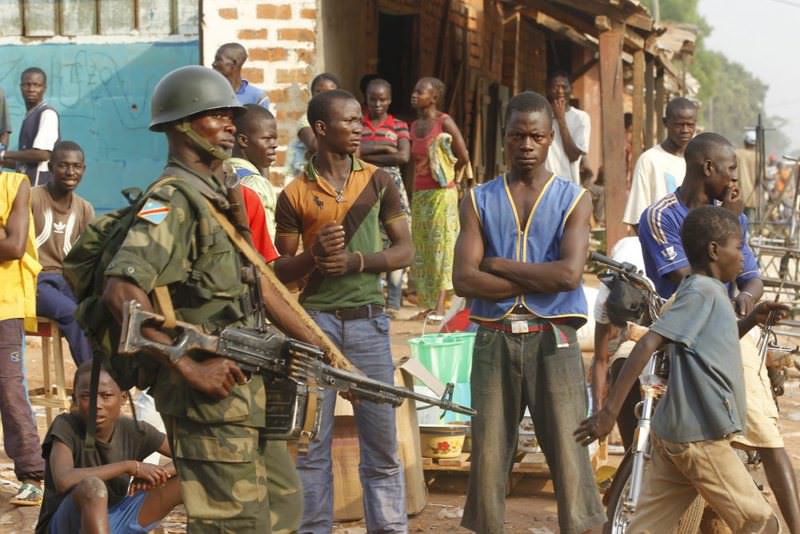 Soldiers from the Democratic Republic of Congo, part of an African peacekeeping force in CAR, patrol a street in Bangui on Feb. 12, 2014.
by Daily Sabah with Agencies Aug 02, 2015 12:00 am

A recent Amnesty International report reveals Muslims in the Central African Republic are being forced to convert as violence continues despite the presence of thousands of U.N. and French peacekeepers

Many Muslims returning to western areas of the Central African Republic (CAR) after last year's inter-communal massacres are being forced to hide their religion or convert to Christianity under threat of death, Amnesty International said Friday.

"Having forced tens of thousands of Muslims to flee western CAR, anti-Balaka militias are now repressing the religious identity of the hundreds of Muslims who remained or who have returned," said Joanne Mariner, the London-based rights group's senior crisis response adviser.

The Central African Republic has been rocked by violence since the mostly Muslim Seleka rebel coalition toppled the long-time president in 2013. The formation of a Christian militia known as the anti-Balaka has targeted Muslims and sent tens of thousands fleeing to neighboring countries. Thousands died in violence, and hundreds of thousands remain displaced from their homes following a March 2013 coup. The Amnesty report, "Erased identity: Muslims in ethnically cleansed areas of the Central African Republic," said that Muslims who have returned to their homes in large swathes of the west of the country following the 2014 killing spree and mass forced displacement "are barred by armed anti-Balaka militia from practicing or manifesting their religion in public."

Muslims told Amnesty International they've been forced to convert or hide their practices. "We had no choice but to join the Catholic Church. The anti-Balaka swore they'd kill us if we didn't," said a 23-year-old man in the Sangha-Mbaere prefecture, whose name was not given to protect his security. "It is effectively illegal for us to pray," said a Muslim trader in Mbaiki in the southwest. "We have to hide, do it quickly and do it by ourselves. Collective Friday prayers are impossible." Amnesty said that outside of areas where Muslims live under the protection of U.N. peacekeepers, Muslims in the western areas "have no freedom to practice their religion in public. Some 30,000 Muslims currently live in a handful of designated areas in CAR, where United Nations peacekeepers are stationed to protect them from sectarian attacks. Prayers are effectively banned, traditional Muslim clothing cannot be freely worn, and the reconstruction of mosques, an estimated 400 of which were destroyed across the country, is not allowed."

"Many of the tens of thousands of Muslim refugees who were expelled from the country in 2014 would one day like to return home, but are waiting until they can do so in a safe and sustainable manner," the report said. Amnesty called on the government in Bangui, the U.N. mission to the country and the international community "to support Muslims' efforts to reintegrate into towns and villages across western CAR and to strengthen the presence of peacekeeping forces to better protect communities from anti-Balaka militias."

The mineral-rich country descended into anarchy one year ago when Seleka rebels – said to be mostly Muslim – ousted Christian President Francois Bozize, who had come to power in a 2003 coup. The rebels later installed Michel Djotodia, a Muslim, as interim president. Anti-Muslim violence has escalated since January, when Catherine Samba-Panza, a Christian, was elected interim president. The French military operation commenced in the country in 2013 to beef up a U.N.-backed military operation after violent clashes between the two groups. Since then, a joint operation by France and the African Union, authorized by the U.N. Security Council, has been taking place with the aim of restoring peace in the country. The U.N. peacekeepers moved there in August to help the 2,000 French troops who had previously struggled to stabilize the area. However, the country has come to the forefront this year with a devastating scandal surrounding the sexual abuse of starving children by French soldiers on peacekeeping duties. France took late action after keeping an internal U.N. report secret for more than one year, despite being aware of the allegations in July last year. French President François Hollande said anyone found guilt would be shown "no mercy."