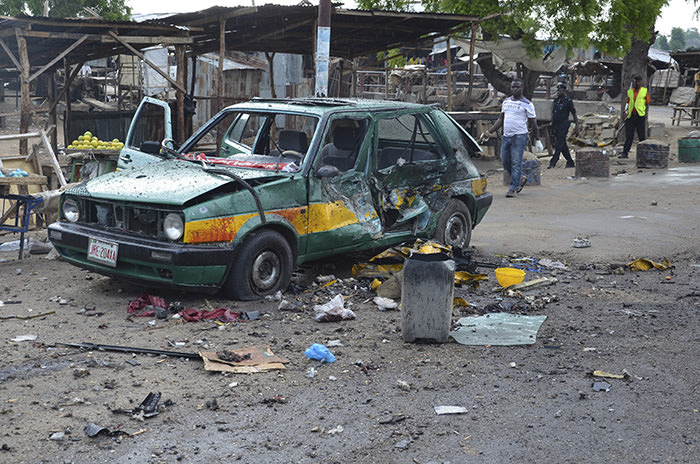 People walk past a damaged car at the site of a bomb explosion in Maiduguri, Nigeria, Friday, July 31, 2015 (AP Photo)
by Associated Press Aug 25, 2015 12:00 am
Two suicide bombers carried out separate attacks Tuesday that killed five people in Damaturu, a town in northeastern Nigeria, police and witnesses said.

In one attack, a girl bomber died in an explosion that killed five people at the crowded entrance to the main bus station, said Assistant Superintendent Toyin Gbagedesin. Witnesses said a young male suicide bomber killed only himself when his device exploded prematurely.

Gbagedesin said 41 people were wounded in the bus station explosion. The bomber appeared to be about 14 years old.

Nigeria's terrorist group, Boko Haram, is suspected of being behind the attacks. It has used dozens of girls and women in recent suicide bombings in Nigeria and neighboring Chad, Cameroon and Niger, raising fears it is using kidnap victims.

More than 1,000 people have been killed since President Muhammadu Buhari was elected in March with a pledge to annihilate the militants, whose 6-year-old uprising has killed a total of about 20,000 people. Nearly 2 million have been driven from their homes, some across borders.

Earlier this year, troops from Chad and Nigeria drove the extremists out of some 25 towns held for months in what they had declared an Islamic caliphate. The insurgents have returned to hit-and-run tactics and suicide bombings.

In one bold attack last week, the extremists ambushed the lead vehicle in a convoy carrying Nigeria's new chief of army staff, Lt. Gen. Tukur Buratai. One soldier was killed and two wounded in a firefight in which the troops killed five attackers and arrested five.