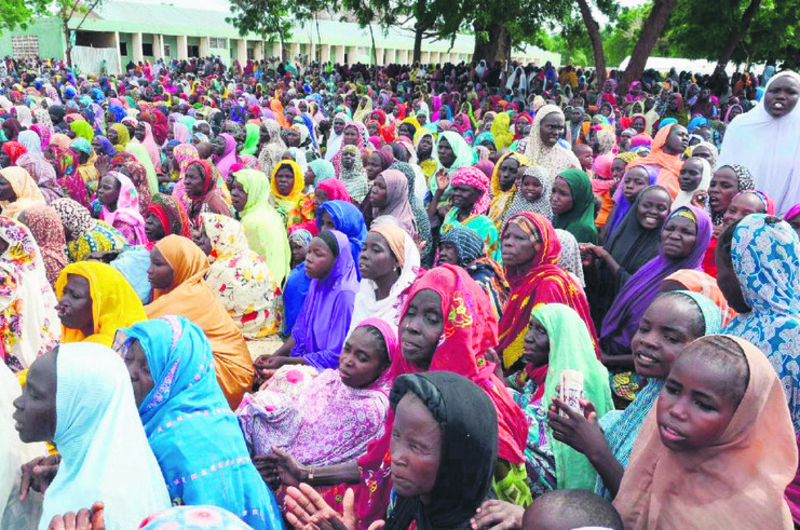 by Sep 07, 2015 12:00 am
Mounting attacks by Nigeria's ferocious Boko Haram militants have sent more than 2.1 million people fleeing their homes in northeast Nigeria, the International Organization for Migration said Friday. Revising sharply upwards its previous estimate of 1.5 million, the Geneva-based IOM agency attributed the increase to a very recent spike in Boko Haram's six-year insurgency. But the state-run National Emergency Management Agency (NEMA) said other factors were at play, such as unrelenting communal strife and the return of Nigerians who had previously fled the country.

Newly-elected President Muhammadu Buhari, who completes his first 100 days in office this weekend, has promised to do far better than the previous administration in wiping out the feared the insurgents. But more than 1,000 people have died in Boko Haram attacks since May 29 when Buhari came to power. "The recent spike in attacks by insurgents triggered the increase," the IOM said, referring to the stepped up attacks. But the hike was also due "to improved access to previously inaccessible areas of Borno state, where the IDP population is now well over 1.6 million."

The IOM said the new figure covered internally displaced people (IDPs) in the northeastern states of Adamawa, Bauchi, Borno, Gombe, Taraba and Yobe as well as the central state of Nassarawa and Abuja. It urged the government as well as the international community to step in quickly as many were in dire need of food and shelter. "Many IDPs, especially in host communities, have yet to receive basic items including food and shelter," said Enira Krdzalic, IOM Nigeria Chief of Mission. "It is very important for the authorities and for humanitarian partners to speed up the delivery of adequate assistance to these people," she added.

Attacks by Boko Haram, seeking to impose a strict religious jurisprudence in northern Nigeria, have killed at least 15,000 people since 2009, with the group's campaign also waged across Nigeria's borders. In recent weeks suicide bombers, many of them women, have staged attacks in Nigeria, Cameroon and Chad.

The IOM said the majority of those displaced (92%) now live in host communities while the remainders live in camps or camp-like sites. But Manzo Ezekiel, spokesman for the state-run NEMA, said the agency was already aware of the increase in IDPs and denied this was solely due to the upsurge in Boko Haram attacks. "We are aware of the new figure of 2.1 million displaced people but it should be noted that there were other factors that brought about the increase apart from the Boko conflict," he said. "We have people displaced by communal violence in states like Nassarawa and Taraba included in the figure," he said. Ezekiel said there were also thousands of Nigerians who fled the country but were just returning home. "For example, some 9,000 Nigerians recently came back from Cameroon and were received and camped by NEMA in Adamawa state," he said. He said the agency has been meeting the needs of the displaced people. "NEMA is on ground providing them with food, shelter and drugs," he said. "Our appeal is for those affected to come to the camps so that we can attend to them. We cannot go to people's homes to give relief to them. They have to come to the camps and the collection centers to receive support," he added. Ezekiel said only eight percent are in the camps while the majority are staying with their host communities. "For them to be reached, they have to register with NEMA so that we will know exactly those we have to take care of," he added. To fight Boko Haram an 8,700-strong Multi-National Joint Task Force, drawing in Nigeria, Niger, Chad, Cameroon and Benin, is expected to deploy soon.
RELATED TOPICS