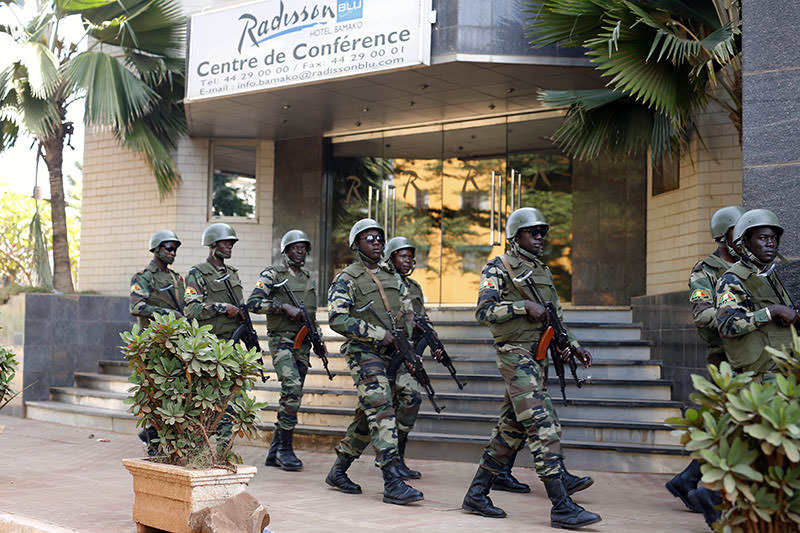 Soldiers from the presidential guard patrol outside the Radisson Blu hotel in Bamako, Mali, Saturday, Nov. 21, 2015, in anticipation of the President's visit (AP photo)
by Compiled from Wire Services Nov 21, 2015 12:00 am
Mali declared a national 10-day state of emergency and three days of mourning late Friday after assailants killed 19 hostages at a hotel in capital Bamako.

Nationals from Belgium, the U.S., China and Russia were among the victims, according to official statements.

Keita thanked Malian and French security forces for their role in ending the siege. U.S. forces were also involved in helping free the hostages.

Al-Mourabitoun, an al-Qaeda-linked group led by Algerian Mokhtar Belmokhtar, claimed it carried out the attack alongside al-Qaeda's north African affiliate.

Seven Turkish Airlines staff were at the hotel when it was attacked early Friday morning.

The airline said Saturday that six had returned to Istanbul by private airplane after spending the night at the country's Bamako embassy. The company's station chief remained in Mali.

According to a senior Belgian official, Geoffrey Dieudonne -- an official with the Wallonia regional parliament -- was killed.

Public health worker Anita Datar, a U.S. national, also died in the attack. In a Twitter message, U.S. Secretary of State John Kerry said: "We mourn American Anita Datar. We extend condolences to family and friends and stand with the Malian people."

"Among the many foreigners captured as hostages there were citizens of Russia - employees of the airline Volga-Dnepr," ministry spokeswoman Maria Zakharova said in a statement.

"Among those killed - six citizens of our country, who together with 13 citizens of other states were shot by the militants in the restaurant literally in the first moments of the terrorist attack on the hotel".

Zakharova said six other Russians had been rescued.

In recent years Mali has been hit by a number of attacks launched by insurgents operating from its northern desert territory.

A French-led 2013 military operation succeeded in driving fighters out of cities and towns taken a year earlier in the north of the country. France still has troops based in the west African country.