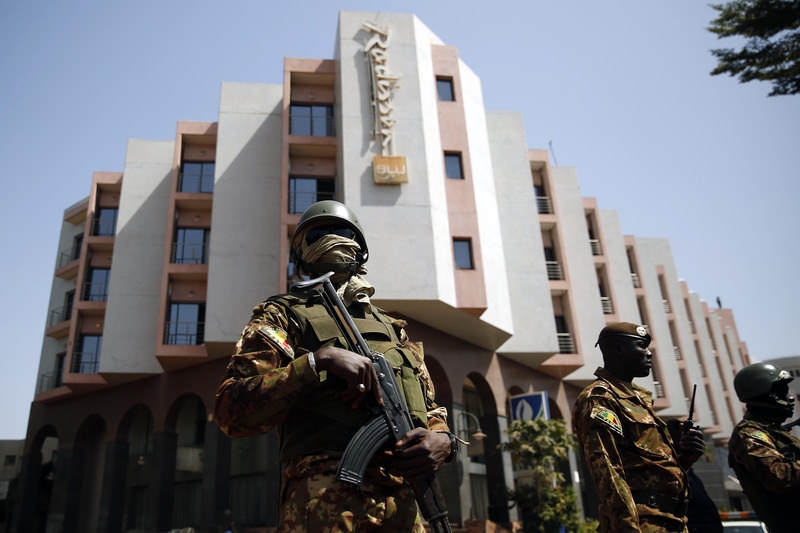 this Saturday, Nov. 21, 2015 file photo, soldiers stand guards in front of Radisson Blu hotel prior to the visits of Malian President Ibrahim Boubacar Keita in Bamako, Mali. (AP Photo)
by Dec 15, 2015 12:00 am
Mali's President Ibrahim Boubacar Keita hailed the reopening Tuesday of a luxury hotel at the centre of a deadly attack as a victory over the scourge of extremist violence.

Gunmen took guests and staff hostage at the 190-room Radisson Blu in Bamako on November 20 in a siege later claimed by two extremist groups that left 20 people dead, most of them foreigners.

"This is a victory of life over the extremists," the head-of-state said as around 100 people gathered at a reopening ceremony for the refurbished hotel.

Keita paid tribute to slain and surviving staff, vowing to tighten security in the capital and promising: "We will continue to fight terrorism in the strongest terms."

Al-Murabitoun, an Al-Qaeda affiliate led by one-eyed Algerian militant Mokhtar Belmokhtar, claimed it was behind the raid while another jihadist group from central Mali, the Macina Liberation Front, later also claimed responsibility.

Days later, Malian forces in Bamako arrested two people in connection with the attack, but no further arrests have been made since.

Sources close to the inquiry say two other suspects are "actively" wanted.

Security has been beefed up since the attack with new gates installed at the Radisson's east and west entrances and twice as many armed guards patrolling the grounds.

"Today we can say that the Radisson is the most secure hotel in the Malian capital," said an official from the Ministry of Security.

The pictures of the three staff killed in the attack were displayed in a reception room where the opening ceremony took place.

"We are thinking of our three comrades. We miss them. That is what hurts me," said a waiter who gave his name as Bintou.