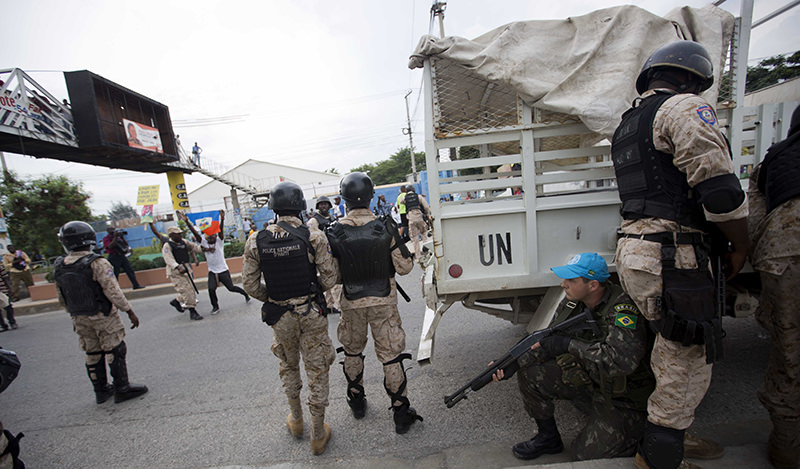 | AP Photo
by French Press Agency - AFP Jan 05, 2016 12:00 am
UN peacekeepers are facing fresh allegations that they sexually abused four young girls in the Central African Republic, the latest in a wave of child rape cases to hit the mission.

The United Nations said Tuesday it had informed three countries of the claims and asked them to investigate their soldiers serving in the MINUSCA mission in Bangui.

A UN spokesman declined to name the countries and to specify how many troops were involved, but sources said the soldiers were from Gabon, Egypt and Morocco.

The latest allegations bring to 26 the number of sexual abuse cases targeting peacekeepers in the Central African Republic.

The UN mission "is investigating new allegations concerning both sexual exploitation and abuse and other misconduct by UN peacekeepers in Bangui," UN spokesman Stephane Dujarric said.

Mission chief Parfait Onanga-Anyanga told troops and police in Bangui that there would be "zero tolerance" for such actions and "no complacency for perpetrators," he added.

The four girls, all minors, received medical care, along with shoes, clothes and hygiene kits.

The troops were accused of rape, sexual exploitation and transactional sex with the girls, some of whom were living in a camp for displaced civilians in Bangui, a UN official said.


The latest scandal was discussed by the UN Security Council during a closed-door meeting on Tuesday, prompting fresh calls for action to put a halt to the recurring cases.

"We are really sick and tired of this coming back each time," New Zealand's Ambassador Gerard van Bohemen told reporters after the meeting.
"There are calls for the council to be given specific information about what is going on in response to these allegations," he said.

Under UN rules, it is up to the troop-contributing country to investigate and prosecute soldiers accused of misconduct while serving under the UN flag.

UN Secretary-General Ban Ki-moon fired the head of the 10,000-strong MINUSCA force last year over the mounting number of cases, but the allegations have continued to surface.

Ban has warned that he is ready to throw out an entire peacekeeping unit if their country fails to prosecute soldiers accused of sex abuse.

The United Nations has been badly shaken by allegations last year that French and African troops forced children to perform sexual acts in exchange for food, from December 2013 to June 2014.

An independent panel last month found that a report by the mission detailing the allegations sat on desks for months until a newspaper article in April sparked outrage over the case.