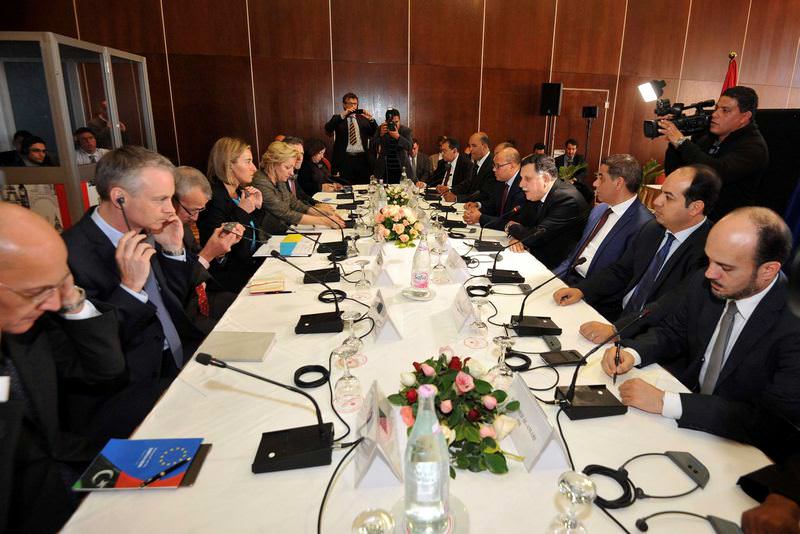 After months of diplomatic efforts, Libya's two rival governments which have agreed on a U.N.-brokered deal declared unity cabinet as DAESH continues to advance in the conflict-torn country

Representatives of Libya's rival factions who are sitting in Tunis and negotiating through a U.N.-brokered process announced on Tuesday that they have formed a unity government aimed at stemming the chaos that has engulfed the country in recent years. In a statement received by The Associated Press, the Unity Presidential Council said it has agreed on a 32-member Cabinet, drawn of representatives from across the country. But whether that government will in fact be able to govern the country remains to be seen.

Each side is backed by an array of different militias. Amid the chaos, a Libyan affiliate of DAESH has surged, claiming responsibility for a series of deadly attacks as it tries to expand its territory and take control of oil terminals and fields, the sole source of Libya's wealth. In December, blocs from Libya's rival parliaments signed a U.N.-brokered deal to form the unity government and established a Unity Presidential Council. The Tunisia-based council includes representatives from the rival parliaments and governments, as well as delegates from other factions. But other members of both the two main factions have rejected the U.N. plan. The United Nations has warned that further delays in implementing the plan will only empower DAESH affiliate. U.N. envoy Marin Kobler, who brokered the plan, tweeted this week that the Libyan political scene is divided while DAESH is united and "set on its destructive goal."

On Monday, Libya's Foreign Minister Mohammed al-Dairi of the internationally-recognized government told reporters during a visit to Cairo that the formation of a Cabinet was a condition for lifting an international arms embargo on the Libyan army fighting militants. According to the U.N.-brokered deal, the new government should be based in Tripoli but it is not clear if the current Tripoli-based authorities opposing the deal would allow it to operate in peace. Recently, a Tripoli-based premier threatened to use force against a security committee supposed to secure a venue for the new government. The head of the council who is also supposed to be the prime minister, Fayez Sarraj, has struggled to form the unity government, which now has 10 days to win the internationally-recognized parliament's endorsement. The lineup of the new Cabinet was approved by seven out of nine members of the presidential council, after two members walked out in protest.

The Cabinet's line-up shows that the premier-designate Sarraj has tried to bring together opponents, a tactic that only could potentially lead to a new round of bickering. The designated defense minister, Al-Mahdi al-Barghathi, is one of eastern Libya's army commanders. He has been fighting a coalition of extremists, including the local affiliate of DAESH in the eastern city of Benghazi. He answers to army chief Gen. Khalifa Hifter, one of Libya's strongmen and a divisive figure because of his enmity the Muslim Brotherhood. The designated interior minister, Al-Aref al-Khoga, is a former interior minister from the Tripoli-based government who is known to have close ties with Brotherhood. The designated-information minister, Khaled Nejm, held the same post in the current government based in eastern Libya. He is also a federalist, advocating a semi-autonomous region in the east.

Over the past years, Libya's transitional governments have been intimidated by militias and, on occasion, armed men would storm ministers' offices and besiege parliament sessions to pressure lawmakers and ministers to meet their demands.

Libya has suffered from a chronic absence of security as various actors have emerged since former President Moammar Gadhafi's ouster. The powerlessness of the central government has led many people to take up arms against the government. State security forces have also failed to protect the government, leaving the country unprotected and open to heavy clashes between rival militias trying to gain authority over the government and the country. Peace and political stability seems far off as no rival militias have been strong enough to put an end to the ongoing war. The central government, in a state of continued turmoil, has long been at the mercy of militias that hope to integrate and build a national army against the interim government.
Last Update: Jan 20, 2016 5:48 pm
RELATED TOPICS