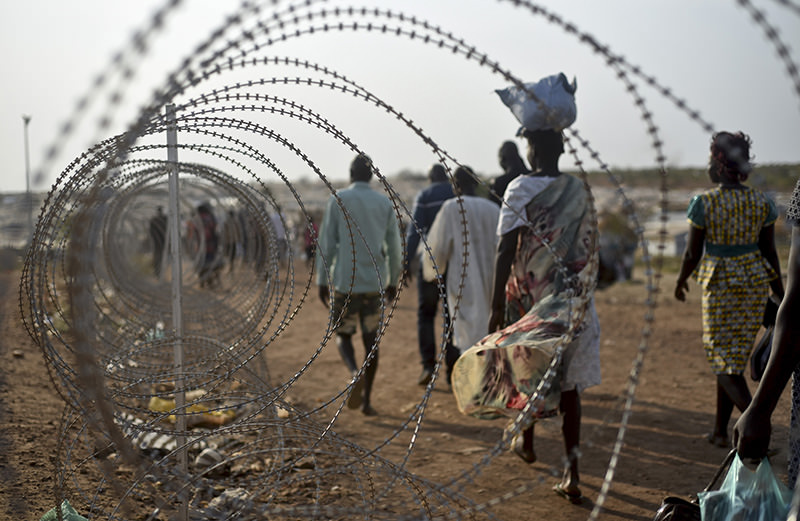 In this Jan. 19, 2016 photo, displaced people walk next to a razor wire fence at the United Nations base in the capital Juba, South Sudan (AP Photo)
by Feb 02, 2016 12:00 am
South Sudanese civilians are dying of starvation as warring forces flout a peace deal, the chief ceasefire monitor said Tuesday, adding he was "staggered" at conditions after two years of war.

The United Nations say thousands have fled recent fighting in the previously peaceful southern farming region around Mundri in Western Equatoria, close to the border with Uganda.

"I am staggered that things have been allowed to get this bad, and I continue to urge you, the leaders of South Sudan, to do whatever you can to ensure the humanitarian effort is successful," said Festus Mogae, a former Botswana president, who is pushing efforts to form a unity government.

Mogae heads the Joint Monitoring and Evaluation Commission (JMEC), set up as part of a stalled August peace deal by the regional bloc IGAD.

East Africa's IGAD bloc last week called on rival forces to allow food into conflict zones on the brink of famine, where aid workers have warned tens of thousands may be dying of starvation.

"I was told this morning that one of the ceasefire monitoring teams, which recently visited Mundri, found people there are starving to death," Mogae said, in a speech read to government and rebel peace delegates in Juba.

Both the government and rebel sides have been accused of perpetrating ethnic massacres, recruiting and killing children and carrying out widespread rape, torture and forced displacement of populations to "cleanse" areas of their opponents.

A report by JMEC released on Sunday, the latest in a long list of atrocities, detailed how government forces suffocated some 50 people by stuffing them into a shipping container in baking heat.

South Sudan is the world's youngest country, breaking away in 2011 from Sudan after decades of war.

In 2012, the two nations battled in a six-month border conflict. In December 2013, civil war erupted in South Sudan.

"Every day we spend here, I think of the children I met growing up without the chance of education, the chance of bettering their own lives denied through no fault of their own," Mogae told leaders. "When will independence make a difference for these people?"
Last Update: Feb 02, 2016 5:42 pm
RELATED TOPICS