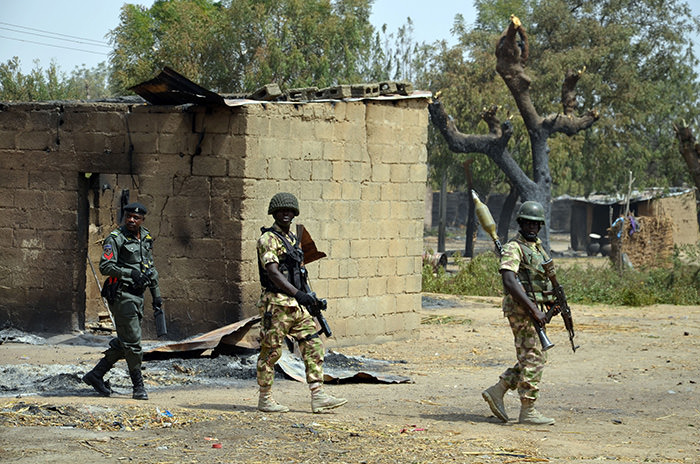 Security forces walk past burnt house on February 4, 2016 during a visit to the village of Dalori village,in northeastern Nigeria (AFP Photo)
by Anadolu Agency Feb 10, 2016 12:00 am
At least 234 captives -- mostly children and women -- were rescued from various Boko Haram camps in the northeastern state of Borno while 31 militants were killed in separate operations by government troops on Monday, a Nigerian army spokesman said.

Sani Usman told a news briefing late Tuesday that 40 civilians held hostage by insurgents were freed from a militant camp in Bulagama; another 103 from Budumri; and another 181 from Bolungu village -- all in the northeastern Borno state.

The spokesman said six militants were also killed and two others arrested in the Kukawa area of the state in two separate encounters with troops. Vehicles and ammunition were also recovered.

Usman also announced the dismissal of 250 soldiers for alleged "indiscipline, cowardice and absence without leave".

Nigeria has been battling a Boko Haram insurgency since 2009, with tens of thousands of lives lost and over 2 millions displaced. Boko Haram has since pledged allegiance to Daesh, although security agencies are still trying to estimate how deep the relationship of the two groups is.