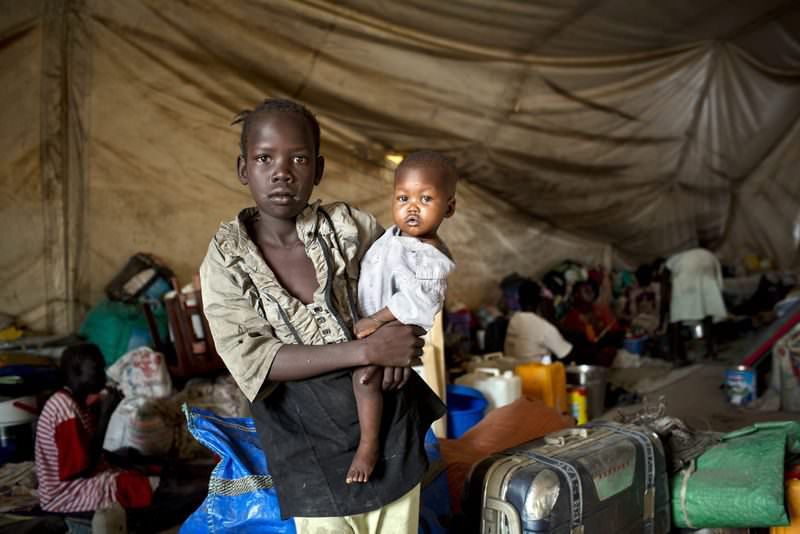 A handout photograph provided by the United Nations Children's Fund (UNICEF) on 30 March 2014 shows a young girl, displaced by recent fighting, holding her baby brother in a tent on the UN base (EPA Photo)
by Feb 17, 2016 12:00 am
"Almost 1 million children are in need of medical treatment for severe acute malnutrition in drought-hit parts of eastern and southern Africa, the UN children's fund (UNICEF) said Wednesday.

About 435,000 children are severely malnourished in Ethiopia alone, UNICEF representatives said in Johannesburg.

A total of about 140,000 children need treatment in Angola and Mozambique, while in Malawi 6,500 children were treated in January.

The need for medical treatment comes amid two years of erratic rain and drought, combined with the climatic phenomenon known as El Nino. The ongoing drought has left about 50 million people food insecure in southern and eastern Africa, according to UN figures.

"We are seeing transactional sex starting to happen to get food. We are seeing children dropping out of school," said Mahimbo Mdoe, a UNICEF representative in Malawi.

"UNICEF is requiring 155 million dollars for the crisis response, but it's only 15 per cent funded," said Megan Gilgan, regional emergency advisor for the UN fund in eastern and southern Africa.