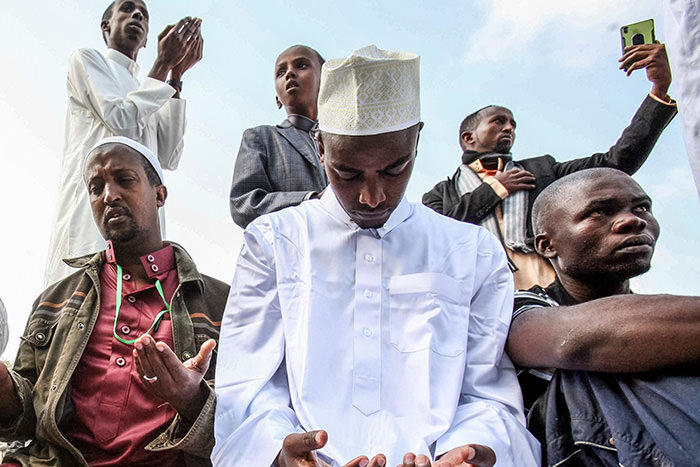 Kenyan Muslims gather to celebrate Eid al-Fitr prayer, marking the end of the fasting month of Ramadan, at the Sir Ali Muslim club in Nairobi on July 17, 2015 (AFP Photo)
by Anadolu Agency Mar 01, 2016 12:00 am
Hundreds of Muslims met at California Grounds in Nairobi's Eastleigh Suburb to celebrate Zero Discrimination Day with Kenyans from other religions Tuesday.

"We are gathered here to celebrate with our Muslim friends, Christians and people from all religions, we are here to celebrate regardless of gender, nationality, religion and race," Halima Hassan, the organizer of the event, told Anadolu Agency.

"Muslims especially in Eastleigh have suffered discrimination over the years. They have not been allowed to pray or work peacefully, we are gathered here to show that we can all live in peace," she added.

In 2014 after a series of grenade attacks in Nairobi that claimed the lives of more than 30 people, Kenya launched a counter-terrorism operation to flush out terrorism sympathizers in Eastleigh, which was identified as the main area where al-Shabaab militants were operating from.

They conducted a door-to-door search arresting all those that did not have ID cards or found in possession of weapons.

Mariam Mire told Anadolu Agency that her brother was among the over 650 youth that were arrested in 2014 during a terror swoop in Kenya's Eastleigh area.

"They see you in a Kanzu (white robe worn by Muslims in Kenya) and immediately label you as a terrorist. My brother had just left the mosque when he was arrested and taken by the police. This is discrimination. This is what I came out here today to fight," Mire said.

"We are eating with Christians, we are celebrating. Muslims should not be discriminated based on their religion," she added.

Millicent Kerubo who is a Christian told Anadolu Agency that she came to mingle with her Muslim friends who had invited her.

"I was invited by my friend Rehema whose brother suffered police brutality when terrorists attacked Nairobi," she said. "He was badly beaten just because he was a Muslim and the terrorists claimed to have carried out the attack as per the Muslim religion."

Human rights organizations in Kenya said that the 2014 counter-terrorism operation known as "Usalama Watch" which was carried out in Eastleigh had indiscriminately targeted Somalis and the Muslim population. More than 4,000 people -- mostly Muslims -- were arrested in the first week alone.
Last Update: Mar 01, 2016 5:43 pm
RELATED TOPICS