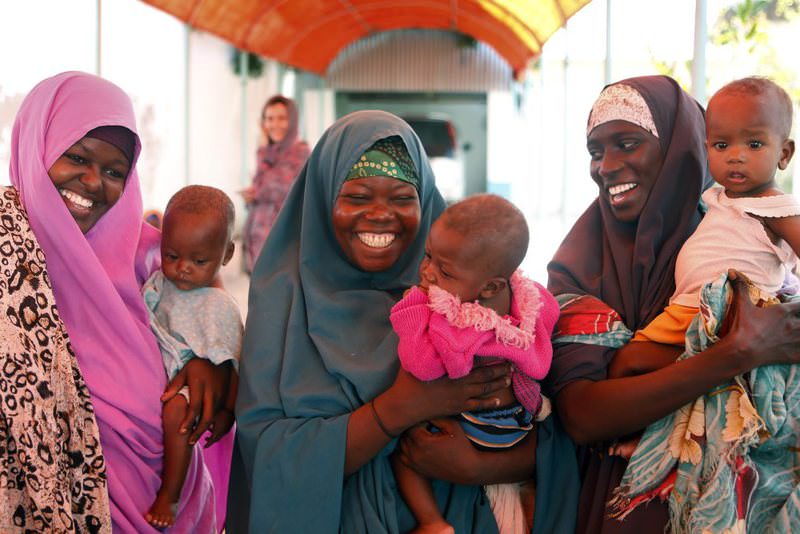 A recent report released by a Somali think tank shows that Turkish policy toward Somalia has been successful over a short time period by combining economic partnership and humanitarian aid, making Turkey the biggest donor and partner for the conflict-ridden country

A report released by the Heritage Institute for Policy Studies in the Somali capital Mogadishu last month underlined that Turkish investors had achieved much despite limited resources and the fact that Somalia suffers from structural and security problems. The report titled, "Turkey's Assistance Model in Somalia: Achieving Much with Little" stated that Turkish aid is longer-lasting and more efficiently delivered than other donors, overcoming bureaucratic problems.

Turks entered Somali territory for the first time in the 16th century when local governors asked Sultan Süleyman the Magnificent to rescue Mogadishu from the Portuguese navy, which was looting the city. Although the Ottomans ultimately lost to the Portuguese navy, they left behind mosques and a castle. After three centuries, the Ottomans returned to Somalia to help the local people, who were resisting British invasion and suffering from a humanitarian crisis. The Ottomans established an embassy, dug water wells and trained Somalis to create an army. Although the Ottoman-supported Somali army achieved some success against British troops, the collapse of the Ottoman Empire ended the resistance.

Turks recently returned to Somalia – this time to provide humanitarian aid when the Somali government made an international call for help in dealing with drought and famine. Turkey's then-Prime Minister, current President Recep Tayyip Erdoğan, paid a visit to the country along with members of his cabinet and family. "The visit not only generated headlines all over the world but also marked the beginning of an unprecedented Turkish engagement in Somalia. It occurred at a time when much of the rest of the world was keeping an arm's length, largely engaging by control from remote offices in neighboring Kenya, with the occasional short trip to Mogadishu's heavily fortified airport. Feeling ignored and like their country had become a byword for a failed state, Somalis were energized by the visit," the report said. Touching on religious and historical relations, the report said, "The findings also show that Turkey received a warm welcome from Somali leaders and the Somali people because of the historical relationship between the two countries and their shared Muslim identity. The majority of the Somalis who participated in this study expressed positive attitudes towards the Turkish engagement in Somalia. Western countries working in Somalia were concerned about the low level of coordination and cooperation with them, but believed that Turkey was more visible and quicker to act."

Turkey had become one of the most rapidly growing economies in the world, and replied to Somalia's call in a positive way. After the two peoples remembered each other, Turkey decided to take a permanent position in the country, which has vast resources and is located very strategically in the region. As other parts of Africa were in the hands of others, including Europeans and China, Somalia only welcomed Turks. After successfully launching humanitarian aid by delivering food, digging wells, building hospitals and schools and carrying out construction of infrastructural projects, Turkey's Somalia policy has moved beyond humanitarian aid. For Turkey, it was quite new to establish a crucial and decisive position in another country's politics. "Economic, diplomatic and security interests soon came into play. Ankara was keen to establish itself as a key global player in diplomacy and development, and Somalia was one of it's more eccentric choices, propelling itself onto center stage, not only in Africa but also across the world. However, Somalia was not simply a passive recipient of Turkish assistance. It continued to play an active role in seeking Ankara's help, working hard to convince the Turks that it was a worthy cause and that the assistance it received was relevant to its needs. Unlike most countries whose diplomatic representations to Somalia, if they had them at all, were based in the safety of neighboring Kenya, Turkey opened an embassy at the heart of Mogadishu in November 2011. Humanitarian workers, doctors and teachers flew in to feed starving Somalis and to open hospitals and schools. Turks worked side-by-side with Somalis to rehabilitate the main roads of the capital. Thousands of Somali teenagers received scholarships to study in Turkey. On March 5, 2012, Turkish Airlines (THY) became the first international carrier to fly directly to Mogadishu since the collapse of the Somali state in 1991," said the report.

Turkish personnel living in Mogadishu and providing services offered by Turkish institutions, including the Turkish Cooperation and Coordination Agency (TİKA) and the Turkish Red Crescent, were disappointed with Turkey's inability to benefit from these resources, and asked what would be the outcome of Turkey's investments. Despite working under very tough conditions, especially in terms of security, the personnel were happy to deliver humanitarian aid but speculated regarding the reasons for Turkey's intervention in Somalia's internal politics, as Turkey supported the unstable Somali government. Turkey's policy was to support the central government and the territorial integrity of the country. Somalia has been divided into 13 federal states, and Somaliland in the north has declared independence.

"Somalia has served as an ideal country in which Ankara may display its model of humanitarian diplomacy. They are fellow Muslims and have massive humanitarian and developmental needs." This was acknowledged by Turkey's former foreign minister Davutoglu, "Turkey's approach to the Somalia crisis is one of the most visible examples of Turkey's human oriented foreign policy... Humanitarian diplomacy refers to something more than humanitarian aid. Any diplomacy that does not touch human beings, that does not have a humanitarian essence and does not speak to the human conscience will not last long." However, Turkey's role in Somalia goes far beyond that of a romanticized, emotional engagement under the banner of humanitarian diplomacy. It has also served as a test bed for Davutoglu's "total performance principle," whereby "multiple political and socio-economic groups, trade organizations, non-governmental organizations (NGOs) and others are included in the foreign policy process," the report said.

Since the Justice and Development Party (AK Party) came to power in Turkey in 2002, relations between Turkey and several African countries have strengthened through increasing humanitarian aid, cooperation in several areas and trade. The number of Turkish embassies on the continent increased to 43 as of 2015, up from 12 in 2003. The number of African countries' embassies also increased in the same period to 53, up from ten in 2008. THY has also started flying to more destinations in Africa. In 2002, THY only flew to ten destinations in Africa, but now it flies to 47. As such, the number of passengers has also increased. While it was less than 150,000 in 2002, it is now more than 2 million per year. The waiver of visa requirements with eight African countries and the opportunity to receive visas upon arrival in six countries has also played a crucial role in the increase in passenger numbers. The change in policy has also offered new opportunities for both Turkish and African businessmen. The trade budget with the continent has passed $25 billion, an eight-fold increase from 13 years ago. Ankara has signed economic cooperation agreements with 38 countries, and has established free economic zones with four. Turkey also continues increasing humanitarian aid and TİKA has opened 16 offices and launched more than 200 projects. The Disaster and Emergency Management Authority (AFAD) has provided $100 billion of humanitarian aid to Somalia and $1.5 million for combating Ebola.
RELATED TOPICS