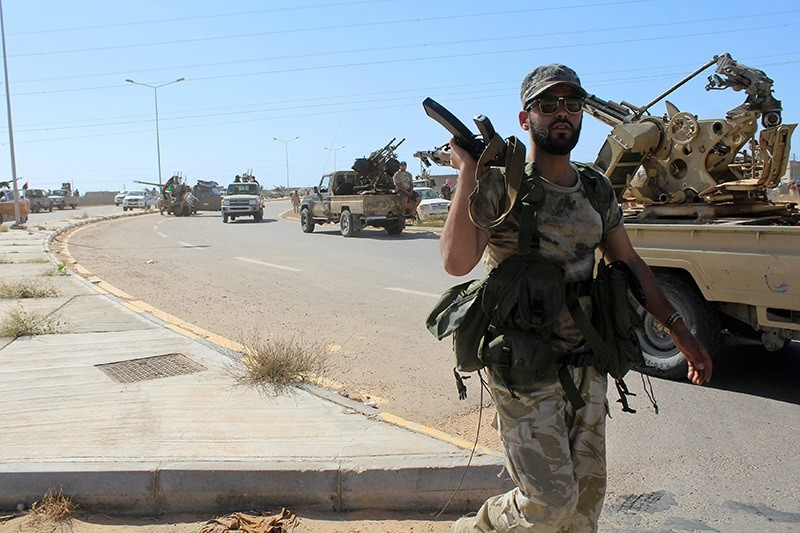 Forces aligned with Libya's new unity government advance along a road in Daesh stronghold of Sirte, June 8, 2016. (Reuters Photo)
by Compiled from Wire Services Jun 09, 2016 12:00 am

Forces loyal to Libya's UN-backed unity government on Thursday announced that they had captured a town near Sirte following a month-long military operation aimed at retaking the north-central city from the Daesh terrorist group.

In a Facebook post, the unity government said its forces had managed to "liberate" the coastal town of Harawah, located some 70 kilometers east of Sirte, "after expelling Daesh fighters from the town".

The government added that its air force had also bombed "Daesh strongholds" inside Sirte.

The United States confirmed the advance on the city, the hometown of ousted dictator Moamer Kadhafi that has also been in the sights of forces of a rival authority in eastern Libya.

The loss of Sirte would amount to a blow for Daesh, which is also faced with battlefield reverses in Syria and Iraq.

"The armed forces entered Sirte. They are currently in the centre, where clashes continue with Daesh," said Mohamad Ghassri, spokesman for the forces of the UN-backed Government of National Accord (GNA).

"The operation will not last much longer. I think we'll be able to announce the liberation of Sirte in two or three days," he told AFP.

"#GNA aligned forces now making rapid advances against #ISIL (Daesh) in #Libya and beginning to enter its stronghold in #Sirte," he tweeted.

In a related development, the unity government's presidential council announced that the number of troops injured during the gradual advance towards Daesh-held Sirte had exceeded 400.

In a statement, it went on to urge the international community to fulfill its promises to provide badly-needed support for the government troops who were currently fighting the terrorist group.