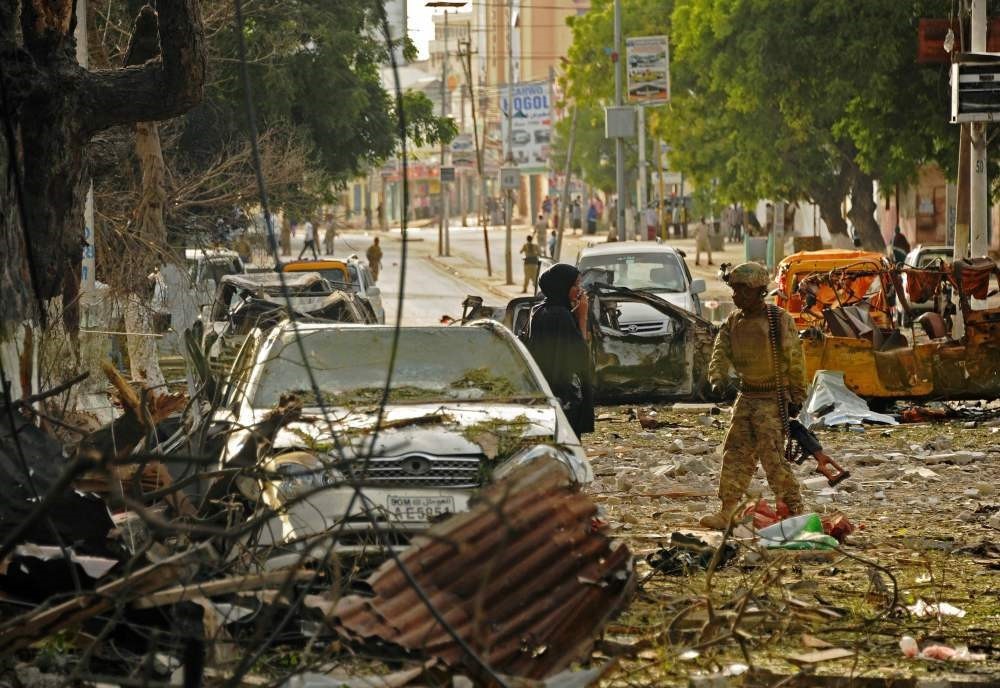 A woman stands next to a soldier at the scene of a terrorist attack on the Ambassador Hotel, which was claimed by Somalia's Al-Qaida-linked al-Shabaab, in Mogadishu on June 2.
by Compiled from Wire Services Jun 10, 2016 12:00 am
Ethiopia said their soldiers deployed in Somalia killed 101 al-Shabab fighters, who yesterday attacked an army base used by the African Union force fighting the al-Qaida linked group.

The al-Shabab movement earlier announced a major assault on the base in Halgan in the central Hiran region of the arid Horn of Africa nation, via their Telegram messaging platform.

Ethiopian government spokesman Getachew Reda dismissed a claim by al-Shabab that they had killed dozens of soldiers, while losing just 16 of their own fighters. "There was an attempt by al-Shabab to attack our forces in central Somalia, but... our forces killed 101 militants and destroyed heavy weaponry," Getachew said. "We are still assessing how many people got hurt on our side, but their claim that they have killed 43 Ethiopian soldiers is an absolute lie. This is a figment of their imagination."

Al-Shabab-run Radio Andalus claimed earlier on Thursday that the al-Qaida-affiliated militants had killed 43 Ethiopian soldiers. It said most of them had died in an explosion. The publication printed photos of alleged dead Ethiopian soldiers lying on the ground, boots lined up with their weapons in front of the bodies.

Casualty figures from this type of attack are impossible to verify independently. On its Twitter account, the African Union force in Somalia or AMISOM – comprising troops from Burundi, Djibouti, Ethiopia, Kenya and Uganda – confirmed "an attempted Shabaab attack" but gave no figures. "The enemy was successfully repulsed," AMISOM said, claiming also to be "in pursuit" of the attackers.

Residents in the area close to Halgan said the attack began when a vehicle driven by a suicide bomber exploded at the entrance to the base, after which extremist gunmen fought their way in. "There was a huge blast and then heavy exchange of gunfire started," said Osman Adan, a resident living nearby.

Shooting had died down by mid-morning and local authorities confirmed the clashes. "There was a major attack this morning at Halgan. Violent elements tried to break into the base of the Somalian army and of AMISOM, but they were driven back and their bodies are everywhere," senior official Guhad Abdi Warsame said. "They lost and now we have complete control of the zone, the situation is normal," he added. Al-Shabab launched a similar "swarming" style attack a year ago, and have since overrun forward operating bases manned by Burundian troops in Lego in June, Ugandan troops in Janale in September and Kenyan troops in El Adde in January.

While the countries contributing soldiers to the peacekeeping effort refuse to confirm casualty numbers, it is believed that scores of AMISOM soldiers were killed in each attack. In the El Adde attack alone, more than 140 Kenyan soldiers are believed to have been killed, although the Kenyan government has refused to confirm any numbers. This is the first such raid on an Ethiopian outpost in Somalia.

The al-Shabab group was forced out of the Somali capital Mogadishu five years ago, but continues to carry out regular attacks on military, government and civilian targets in its battle to overthrow the internationally-backed administration. The group typically intensifies attacks during Ramadan, but this year is considered critical, with the al-Shabab eager to disrupt an expected change of government leadership due in the coming months.
RELATED TOPICS