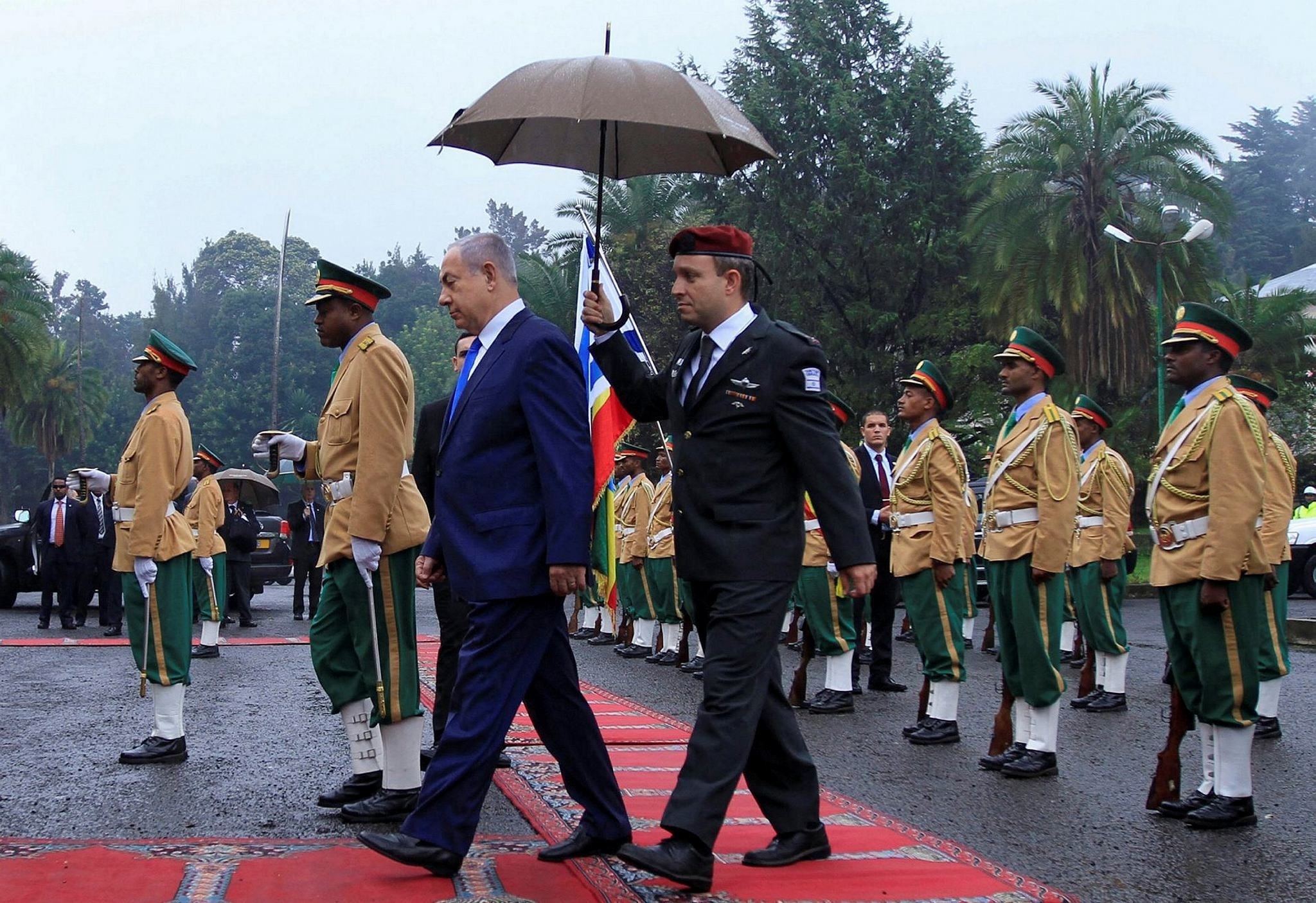 sraeli Prime Minister Benjamin Netanyahu is escorted after inspecting a guard of honor at the National Palace during his State visit to Addis Ababa, Ethiopia, July 7, 2016. (REUTERS Photo)
by Associated Press Jul 07, 2016 12:00 am

Israeli Prime Minister Benjamin Netanyahu on Thursday denied reports of an attempt on his life in Kenya during his heavily guarded African tour this week in which he seeks allies after decades of relationships strained by the Palestinian issue.

Netanyahu said he was learning about the reports of an assassination attempt for the first time during a press conference with Ethiopian Prime Minister Hailemariam Desalegn in Addis Ababa.

"The answer is we know nothing about it because there is nothing in it," Netanyahu said. He made the remarks in response to a reporter's question following an anonymously sourced report in the Kuwaiti newspaper al-Jarida.

Kenyan officials also denied there was an effort to kill Netanyahu.

"I'm not aware, and there was no such thing at all. Those are lies," Inspector General of Police Joseph Boinnet said.

Israel's Foreign Ministry spokesman Emmanuel Nahshon said a report that Netanyahu's motorcade changed its route because of an explosives threat was "simply not true."

The Israeli prime minister is protected by heavy security in Israel and abroad, given high threats against Israeli targets around the world. Israeli Prime Minister Yitzhak Rabin was assassinated by a Jewish extremist in Tel Aviv in 1995.

Netanyahu's four-nation Africa visit is the first to sub-Saharan Africa by a sitting Israeli prime minister in nearly three decades. He has visited Uganda, Kenya and Rwanda while pursuing closer security and other ties with African nations, which cut or limited relationships with Israel in the 1970s. African states were also opposed to Israel's close ties to South Africa's apartheid government.

Mwambutsya Ndebesa, a professor of history at Uganda's Makerere University, said he believes Netanyahu has not succeeded in his mission to win African support on the Palestinian issue.

"I think African solidarity is still firm in regard to the liberation of the Palestinian people," Ndebesa said. "The liberation norms of Africans are still very strong. The extreme position of Netanyahu has not convinced Africans that they should be on his side."

Netanyahu and Ethiopia's prime minister said Thursday they would renew cooperation in the fight against extremism, a theme that Netanyahu has repeated often during his African tour, and they signed agreements to increase ties in technology, agriculture and more.

"We have a commitment and we are keeping it on a humanitarian basis and on the basis of family reunifications. It will take place in the current budget," Netanyahu said.

Ethiopian Jews have complained of discrimination in Israeli society, and hundreds recently demonstrated against what they called Israeli police brutality.