As Juba fighting intensifies, 15,000 forced to flee their homes 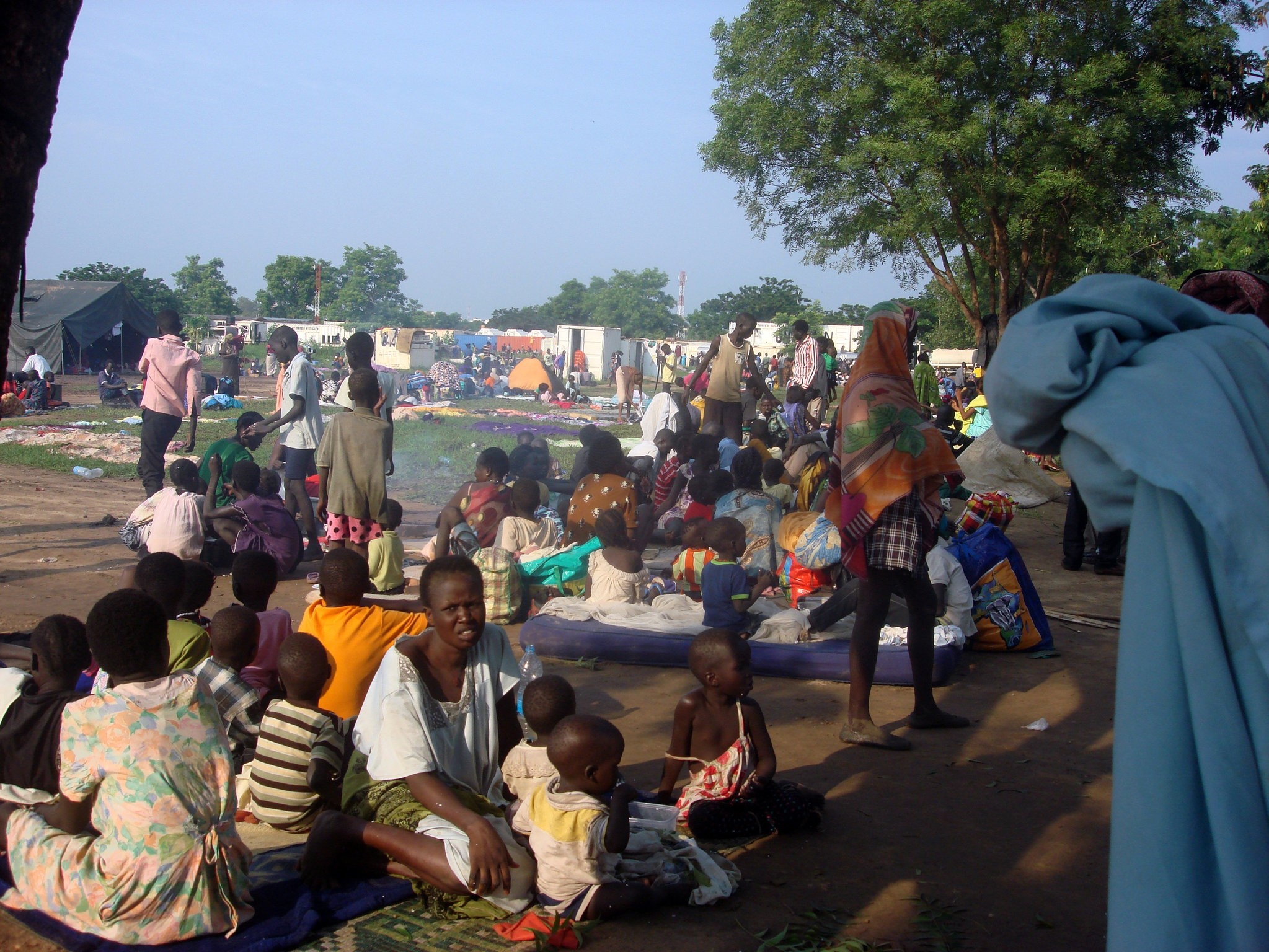 Fighting in South Sudan's capital has forced up to 15,000 people to flee, some of them ordered out of their neighbourhoods by soldiers, as others were trapped in their homes facing a shortage of food and water, aid agencies said on Monday.

South Sudanese President Salva Kiir ordered a ceasefire by his SPLA army on Monday but not before hundreds were killed in four days of clashes between troops loyal to Kiir and his rival Vice President Riek Machar.

Analysts say the violence risks plunging the world's youngest nation, which celebrated its fifth anniversary on Saturday, back into civil war despite a deal signed last August between the two men to end a previous cycle of bloodletting.

Up to 15,000 people could be displaced, according to World Food Programme (WFP) spokeswoman Challiss McDonough in Nairobi.

The U.N. mission UNMISS said 7,000 people had fled to its two bases in Juba, already home to almost 30,000 people who fled a previous cycle of violence.

Another 3,000 people were sheltering in the WFP compound and 3,000 more had taken refuge in one of the city's churches, McDonough told the Thomson Reuters Foundation.

"They are looking for any place that's secure," McDonough said. "We've got as many people into the (WFP) bunker as we can get because there's active fighting in that area."

UNMISS said on Monday it condemned the use of heavy weapons, including rockets from attack helicopters, around its bases where eight people have been killed and dozens wounded in the past 24 hours.

One shell hit a maternity ward in the U.N. base in the Jebel area of Juba run by the International Medical Corps (IMC), forcing staff to carry critical patients to another medical centre on the base, the charity said.

Two of the 139 wounded people treated by IMC since Friday have died, spokeswoman Larissa Schneider said.

U.N. Secretary-General Ban Ki-moon urged the Security Council on Monday to impose an arms embargo on South Sudan, sanction leaders and commanders who are blocking the implementation of a peace deal and fortify a U.N. peacekeeping mission.

Heavy fighting involving tanks and helicopters raged in South Sudan on Monday between troops loyal to President Salva Kiir and those backing Vice President Riek Machar. The violence, which erupted in the capital Juba four days ago, risks a return to civil war in the world's newest nation.

"This is the time to massively reinforce U.N. action," Ban told reporters, adding that fighting had spread to areas outside of Juba in Central Equatoria state.

"When a government cannot or will not protect its people, and when warring parties seem more intent on enriching and empowering themselves at the expense of their people, the international community has a responsibility to act," he said.

Two Chinese U.N. peacekeepers and one local U.N. staff member have been killed in the fighting, Ban said. U.N. peacekeepeers have been deployed in South Sudan since the country gained independence from Sudan in 2011.

"We desperately need attack helicopters and other material to fulfill our mandate to protect civilians," Ban said. "I also urge all countries contributing to (the U.N. mission) UNMISS to stand their ground. Any withdrawals would send precisely the wrong signal, in South Sudan and across the world."

Kiir and Machar have long been rivals in politics and on the battlefield. A civil war that began in December 2013 came a few months after Kiir dismissed Machar as his deputy. The pair signed a peace deal in August 2015, but implementation has been slow.

"Yet again, the leaders of South Sudan have failed their people," Ban said. "What kind of leadership is it that resorts to deadly weapons and identity politics, time and again? Failed leadership."

In a rare move, Ban called for an immediate arms embargo on South Sudan and targeted sanctions on leaders and commanders blocking implementation of the peace deal.

The United States, Britain, France, Angola and other members of the Security Council pushed for an arms embargo on South Sudan earlier this year. But veto power Russia said it was opposed to such a move because it did not believe it would be helpful to implementation of the peace deal.

Ban said he would meet with the 15-member Security Council on Tuesday to discuss the situation in South Sudan.

Several aid agencies said they had been trying to get in touch with all of their local staff - often without success.

"(Our staff) said they've tried to leave their neighbourhood because they don't feel safe and they are taking cover under their beds with their children," Concern Worldwide's country director Feargal O'Connell said via Skype from Juba.

"In some parts of the city, soldiers are actually telling people to leave neighbourhoods and (people) have been given a very short window - you've 10 minutes to get out," he said.

"In other areas, people are trying to move but they come to a roadblock and the soldiers are turning them back."

Humanitarians are worried that residents in the city are running short of clean water, which is usually supplied by trucks selling purified water drawn from the River Nile.

"Our biggest concern is that a lack of clean water might ... see the eruption of water-borne diseases like cholera," said Oxfam's country director Zlatko Gegic by Skype.

"We are afraid that we might be seeing the same scenario very soon," Gegic said.

Fighting died down on Monday afternoon, allowing the International Committee of the Red Cross (ICRC) to make its first aid delivery since Saturday, an ICRC official said.

"What we are doing is really a first step ... the first drop in an ocean of needs," ICRC's head of delegation in South Sudan Jürg Eglin said after a team delivered supplies to two hospitals, a church and two compounds sheltering displaced people.

ICRC's priority is to negotiate with military authorities to allow its staff to pass checkpoints to collect and bury the dead and to assist the injured and displaced, he said.

"We know about some civilians being shot at in and around these protected (U.N.) sites," Eglin told the Thomson Reuters Foundation by phone from Juba.

Civil war erupted in late 2013, pitting President Kiir, an ethnic Dinka, against his rival Machar, a Nuer, killing thousands and forcing more than 2.5 million from their homes.

A new flare-up risks driving yet more people to refugee camps across the border - and exacerbating hunger.

Almost half of South Sudan's 11 million people are short of food, with farming disrupted by fighting, inflation at nearly 300 percent and imported food often unaffordable.

"We are seeing increased malnutrition rates in Juba," said Concern Worldwide's O'Connell. "My worry is the population are going to be stretched to breaking point."

Aid agencies have been unable to evacuate staff because fighting had closed the airport, humanitarians said.