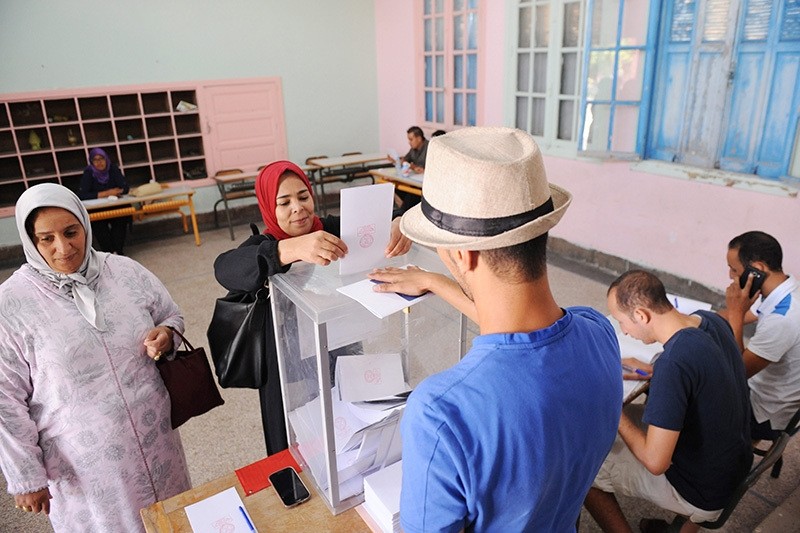 Moroccan woman vote in the parliamentary elections at a polling station in the capital Rabat, Morocco, 07 October 2016 (EPA Photo)
by Compiled from Wire Services Oct 08, 2016 12:00 am

Morocco's ruling Justice and Development Party (PJD) won the largest share of seats in the parliamentary election on Saturday, taking an expected 129 places in the House of Representatives. Based on figures from the Interior Ministry and political parties, Prime Minister Abdelilah Benkirane's party is due to take the largest share of seats in the 395-seat chamber, 99 from constituencies and 30 from national lists designed to promote gender and youth representation.

The elections saw strong participation by the PJD, which won a majority in Moroccan municipal polls in September of last year. But the real power will remain in the hands of King Mohammed VI, the scion of a monarchy that has ruled the North African country for 350 years. Under the 2011 constitution, the king will appoint a prime minister from the biggest party in parliament.

Friday's vote was the kingdom's second general election since the Arab Spring, when protests led to constitutional reform that delegated some of King Mohammed VI's powers to the prime minister. A new constitution transferred some of the king's powers to parliament at a time when autocratic regimes were falling in Tunisia, Egypt and Libya. Prime Minister Benkirane's PJD heads a coalition that includes communists, liberals and conservatives. The party stated a second term would allow it to press ahead with its economic and social reforms.

Moroccan elections in 2011, which coincided with that year's spate of "Arab Spring" uprisings, saw voter turnout of 45 percent, while polls held in 2007 saw a 37 percent turnout rate, the lowest ever in the country's history. The PJD won the 2011 election and went on to form a broad coalition.