At least 14 dead in Mogadishu hotel attack and over 50 injured, police says 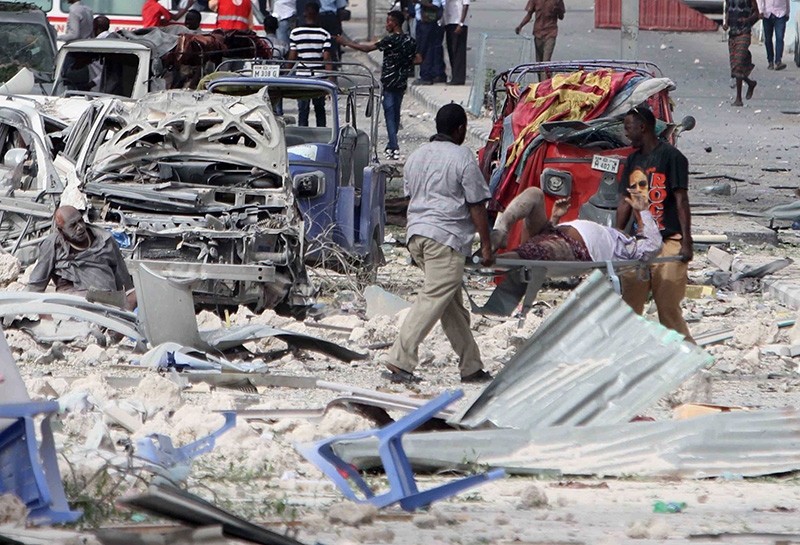 An injured man is carried by helpers away from the scene of a car bomb attack at the Dayah Hotel, located near Somalia's parliament in central Mogadishu, Somalia, 25 January 2017. (EPA Photo)
by Compiled from Wire Services Jan 25, 2017 12:00 am

At least 14 people were killed Wednesday morning and over 50 wounded, including three journalists, when twin car bombs and gunmen targeted a popular hotel near Somalia's parliament building, police said.

Abdirasak Omar Mohamed, Internal Security Minister, told a news conference at the scene of the attack that at least 10 civilians and four al-Shabaab attackers were killed and 51 wounded when al-Shabaab militants targeted the Dayah Hotel in the capital Mogadishu.

"Our security forces managed to neutralize four al-Shabaab gunmen who stormed the hotel after the bomb blasts," he said.

"No government official, soldiers, or MPs were killed or injured, but two clan elders from the southwest state are among the victims," he added.

Mohamud Mustaf, a police captain in the area, told Anadolu Agency on the phone, "The Dayah Hotel is much frequented by Somali government officials, including MPs."

He added, "The attack began with a suicide truck followed by a gun battle. Some 20 minutes after the truck bomb, a second car bomb exploded outside the hotel. The injured were rushed to hospitals."

Aadan Isack, an eyewitness, told Anadolu Agency that a long gun battle followed the bombings, which he said "rocked the whole city."

On pro-insurgent radio Andalus, al-Shabaab, a Somali-based al-Qaeda-affiliated group, claimed its suicide bombers had carried out the attack on the hotel, saying it is frequented by government "apostates".​

Al Shabaab, which until 2011 controlled Mogadishu and much of Somalia, often launches bomb and gun attacks in the capital, saying it wants to topple the Western-backed government.

In June, gunmen stormed the Nasa-Hablod hotel, killing at least 14 people. Two weeks before that, gunmen killed 15, including two members of parliament, at the Ambassador hotel.

Earlier this month, a bomb explosion at a restaurant in Mogadishu killed three, and a suicide bomber detonated an explosives-laden vehicle at a security checkpoint near Mogadishu's international airport, killing at least three. That blast occurred a few hundred meters (yards) from the main base of the African Union peacekeeping mission.

The assaults have threatened this nation's attempts to rebuild from decades of chaos. The presidential election, a key step toward recovery, already has been delayed multiple times because of security and other concerns.

In the past two years, a campaign by African Union troops and Somali forces has driven the group out of key urban strongholds, but it remains active from bases in rural areas.