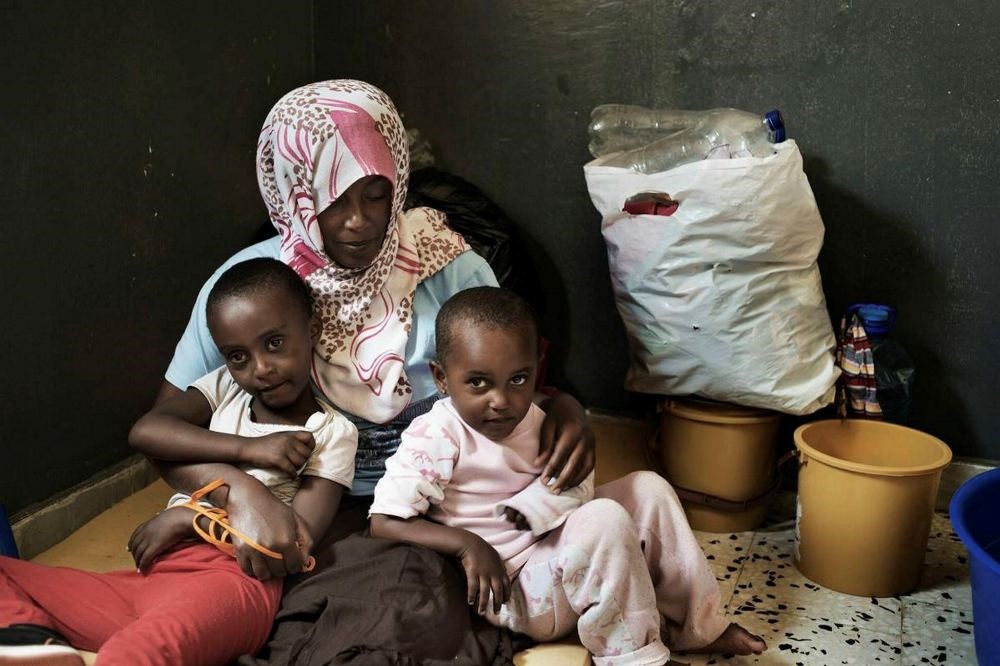 An Eritrean woman with her two daughter inside their cell at Alguaiha detention center for illegal migrants in Libya.
by Compiled from Wire Services Mar 01, 2017 12:00 am

As more than 25,000 unaccompanied children make the dangerous journey to Europe via the central Mediterranean smuggling route, through Libya, child migrants are subjected to sexual violence in detention centers, UNICEF reports

Women and children making the dangerous journey to Europe to flee poverty and conflicts in Africa are being beaten, raped and starved in "living hellholes" in Libya, the United Nations children's agency (UNICEF) said Tuesday.

There were a quarter of a million migrants in Libya as of last September, most of whom languish in unsanitary, disease-ridden detention centers which UNICEF described in its report as "no more than forced labor camps ... and makeshift prisons".

Armed groups have taken effective control of official detention centers for migrants amid the political chaos that now reigns in Libya and they also run their own centers, competing and cooperating with criminal gangs and smugglers, according to the United Nations. "For the thousands of migrant women and children incarcerated, [the centers] were living hellholes where people were held for months," the UNICEF report said on Tuesday.

In interviews with more than 100 women and children, nearly half said they had been raped or abused several times during their journey, it said. Most of the children said they were beaten by adults along the way, with girls suffering more abuse than boys.

"Here [in the detention center] they treat us like chickens. They beat us, they do not give us good water and good food," said Jon, a 14-year-old boy who travelled alone from Nigeria to escape the militant group Boko Haram. "So many people are dying here, dying from disease, freezing to death," he was quoted as saying in the report.

The sea crossing from Libya to Italy, operated by people-smugglers based in the North African country, is now the main route for migrants bound for Europe. Nightmarish conditions in Libya are helping to drive a surge in the numbers of migrants attempting to reach Italy in the depths of winter, humanitarian officials and asylum seekers say. European efforts to close the route are also thought to lie behind a 50 to 70 percent increase in the number of mainly African migrants who have landed at Italian ports in the first two months of this year, compared to the same period in 2015 and 2016. More than 2,700 people have been rescued in recent days, including a newborn delivered aboard a Norwegian police vessel. The latest arrivals will lift the total for January and February to more than 13,400, according to government figures released Monday.

In Libya, the turmoil engulfing this North African country has become a death trap for thousands of migrants, most of them from sub-Saharan African countries, seeking to escape poverty and find a better life in Europe.

Libya, the oil-rich North African country descended into chaos after the Western intervention and parts of it have become a bastion for Daesh, giving the militants a new base even as its territory in Syria and Iraq shrinks under constant assault.

Five years after Libyan leader Moammar Gadhafi was toppled by NATO intervention, the country has become the main jump-off point for migrants heading for Europe, and the breeding ground for militants as there has been no security or stability left in the war-torn country.
RELATED TOPICS