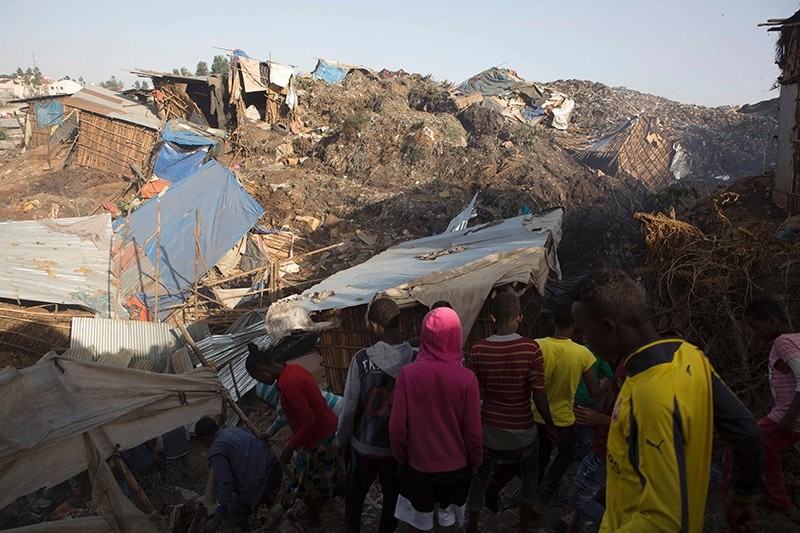 People look at the damage done to dwellings built near the main landfill of Addis Ababa on the outskirts of the city on March 12, 2017, after a landslide left at least 50 people dead. (AFP Photo)
by Anadolu Agency
Mar 13, 2017 12:00 am

Residents of the Ethiopian garbage dump which saw a fatal landslide late Sunday predicted that the death toll from the accident will eventually rise to over 200.

Official figures Monday put the number of bodies recovered thus far from the accident in the capital Addis Ababa at 50.

As yet no cause for the disaster has been announced.

Dagmawit Moges, head of the city's communications bureau, said Sunday that among the dead were 32 women.

According to the Addis Ababa Fire and Emergency Case Prevention and Control Authority, the landslide leveled 15 houses in the area.

At the scene this morning, teams found another badly severed body, put it on a stretcher, and took it away inside an ambulance.

"I have lived here for more than 10 years and I know the village well. There are 18 mini houses and many squatters all buried under that huge mass of rubble. And the hour it all happened was when most people got back home," a man in his late thirties who requested anonymity told Anadolu Agency.

Another resident said there were at least five people in every house and began to count apprehensively.

The scene of the accident was already hot in the morning, and three excavators were at work. Huge piles of mixed rubbish gave off a constant stench.

"Stretcher, stretcher!" a young volunteer called out to a line of policemen from below. One of the policemen said that was not his job.

Shouting furiously, the volunteer eventually got a stretcher and used it to bring up a severed body.

All around, people in black wailed continuously.

At one point, the body of an entire cow was hauled out of the trash.

So far no survivors have been rescued, and the clock is ticking for any hopes of finding people alive.

The huge pile of rubble that descended on the village also blocked a nearby brook and a cobbled street.

"No one saw the danger coming," the first resident said.

The landfill has been a dumping ground for the capital's garbage for more than 50 years. Smaller collapses have occurred at Koshe — or "dirty" in the local Amharic language — in the past two years but only two or three people were killed, residents said.

Addis Ababa's mayor has vowed to relocate those living at the landfill, which officials say receives close to 300,000 tons of waste collected each year from the capital.