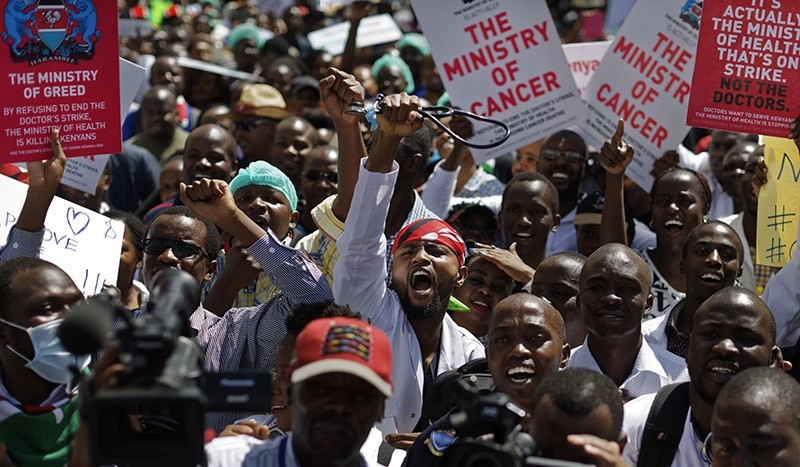 In this Wednesday, Feb. 15, 2017 file photo, a striking doctor holds his stethoscope in the air as he and other medical staff protest the detention of their union leaders, outside an appeal court in Nairobi, Kenya. (AP Photo)
by Associated Press Mar 14, 2017 12:00 am

Thousands of doctors at Kenya's public hospitals have agreed to end a 100-day strike that saw people dying from lack of care, an official with the doctors' union said Tuesday.

The strike was blamed for dozens of deaths, as the majority of Kenyans cannot afford private health care. Deputy Minority leader Jakoyo Midiwo said during a TV interview that 24 of his constituents had died due to lack of care during the period.

The government and union officials signed a deal to address pay and other issues in dispute, said Dr. Ouma Oluga, the secretary-general of the Kenya Medical Practitioners, Pharmacists and Dentists Union.

Doctors will resume work Friday even though the agreement says they should resume immediately, he said.

"It is regrettable that it took so long. Kenyans have suffered ... we cannot fathom the extent of pain which Kenyans felt in the 100 days," said Kenya's health minister, Cleopa Mailu.

President Uhuru Kenyatta last week threatened to fire the 5,000 doctors if they didn't return to work, but doctors defied him. Earlier, seven union officials were jailed for a month for contempt of court for not ending the strike.

Oluga said the biggest achievement in the agreement is that doctors now will work just 40 hours a week and will be compensated for extra hours. Previously, doctors in public hospitals were on call at all times.

"It's a win-win for everybody," Oluga said.

Doctors had pushed for the implementation of a 2013 collective bargaining agreement that committed the government to increase pay, restore dilapidated public health facilities and consistently train doctors, among other issues. It also set out measures to address the East African country's huge shortage of doctors.

Now the labor court will oversee the implementation of the agreement in 60 days, Oluga said.

Kenya's public doctors, who train for six years at universities, earn a basic salary of $400-$850. That's similar to some policemen who train for just six months. Doctors now are expected to get an increase of $700 to $1,000 based on their seniority, Oluga said.

Kenya's doctors also went on strike in 2012 to protest the bad state of public health care. Emergency rooms in some public hospitals frequently don't have gloves or medicine, and power outages sometimes force doctors to use their cellphones to provide adequate light for a surgical procedure.