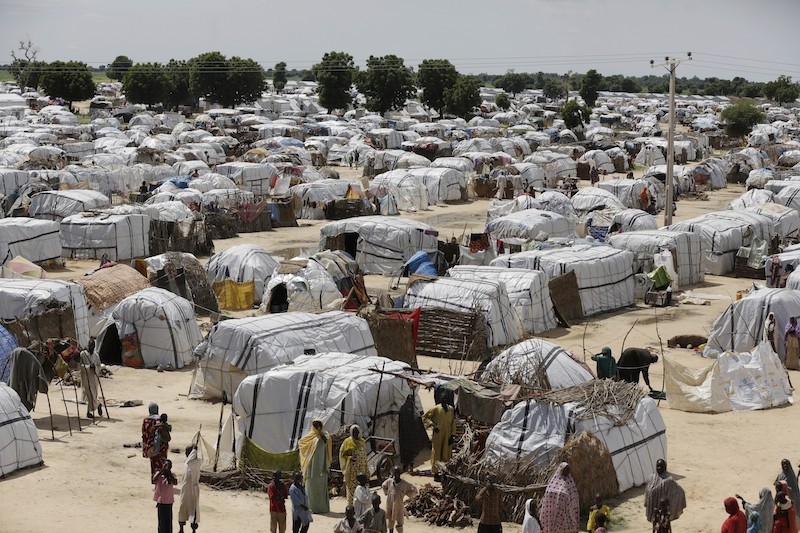 Four female suicide bombers struck near a refugee camp hosting thousands of people who have been displaced by Boko Haram in Nigeria's north-eastern city of Maiduguri. (AP Photo)
by Mar 15, 2017 12:00 am

Four women blew themselves up in a suicide attack near a refugee camp that hosts thousands of people displaced by Boko Haram in Nigeria's north-eastern city of Maiduguri.

Two people were killed and 16 injured by the explosions near the Muna Garage camp in the early hours of Wednesday, said National Emergency Management Agency spokesman Abdulkadir Ibrahim.

"Rescue and health workers immediately moved to the scene after the alert. The victims have been transported to the state specialist hospital and university teaching hospital in Maiduguri," Ibrahim said.

The city of Maiduguri, which hosts more than a million people displaced by Boko Haram, has been targeted by the terrorists several times in recent months.

Boko Haram poses a steady threat to communities in the northeast of Nigeria and has also launched offensives in neighboring Chad, Nigerand Cameroon. The group's goal is to enforce a strict interpretation of Islamic law, known as sharia.

Since 2009, at least 14,000 people have died at the hands of the Sunni fundamentalists in Nigeria, Chad, Cameroon and Niger. According to the United Nations, an estimated 2.7 million people in the region have fled their homes due to Boko Haram.