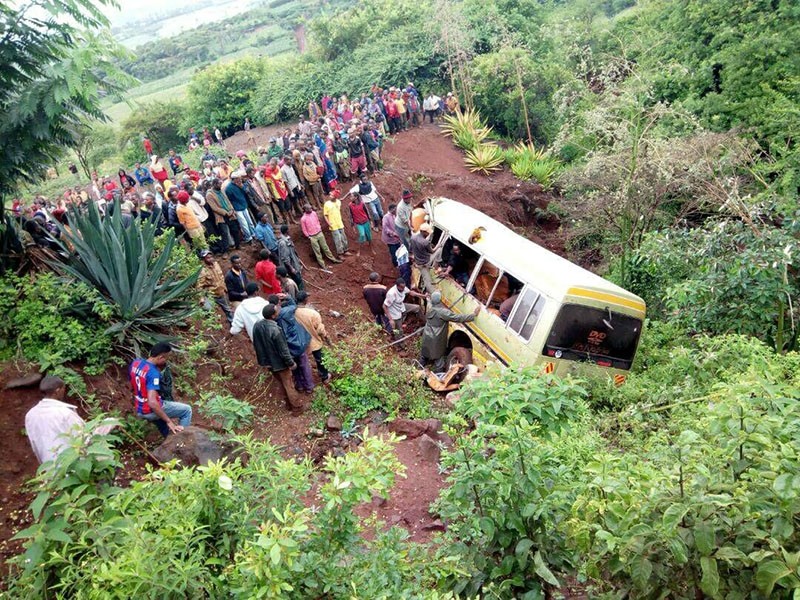 Residents gather at the scene of an accident that killed schoolchildren, teachers and a minibus driver at the Rhota village along the Arusha-Karatu highway in Tanzania's northern tourist region of Arusha. (Reuters Photo)
by Anadolu Agency May 07, 2017 12:00 am

Tanzania is mourning the deaths of 30 students who were killed in a bus accident Sunday in Karatu township in the Arusha region.

Two teachers and the bus driver were also killed in the crash Saturday in the Rhotia area, about 150 kilometers (92 miles) northeast of the popular tourist city of Arusha. Six students were injured and one managed to walk away unharmed.

As the country mourns, political rivals have managed to put aside their differences in a show of unity as President John Magufuli and the main opposition party, Chadema, urged their supporters to come together to grieve for the victims from the Lucky Vincent Primary School who were headed to Karatu township for a study tour.

"This is a nation tragedy. Its very sad and shocking to learn we lost our beloved 30 pupils, their teachers and a driver in terrible road accident," Magufuli said in a statement delivered via Arusha Regional Commissioner Mrisho Gambo.

He asked the parents of the victims, relatives, friends and the entire country to remain calm during this tough and difficult period as the government begins a probe into the crash.

Arusha District Commissioner Gabriel Daqaro said the victims will be given a public national funeral Sunday at the Sheikh Amri Abeid stadium in Arusha.

A top official in Chadema, John Mrema, urged Tanzanians to "bury all differences" as the country deals with the shock of the accident. "We should remain Tanzanian in such kind of situation by holding one another hands," he said late Saturday.

"The bus skidded off the road and plunged into a river in the Rhotia area, a few kilometers before Karatu town along the Arusha-Ngorongoro crater road," he said.

The school's deputy headmaster, Longino Vincent, said 90 students were traveling to Karatu for a joint examination with a sister school, Tumaini Primary in Karatu.

"They were in three different cars -- two owned by our school and the other one which was involved in the accident, was hired," he said. The other two buses were not involved in the crash.

The crash Saturday is the latest in Tanzania that has been plagued by accidents that have claimed the lives of at least 82 students in recent decades.

At least 40 students were burned alive in 1994 as they slept in a dormitory at the Shauritanga Secondary School in the Kilimanjaro region.

Fifteen years later, in 2009, 12 students died in a fire at the Idodi Secondary School in Iringa.