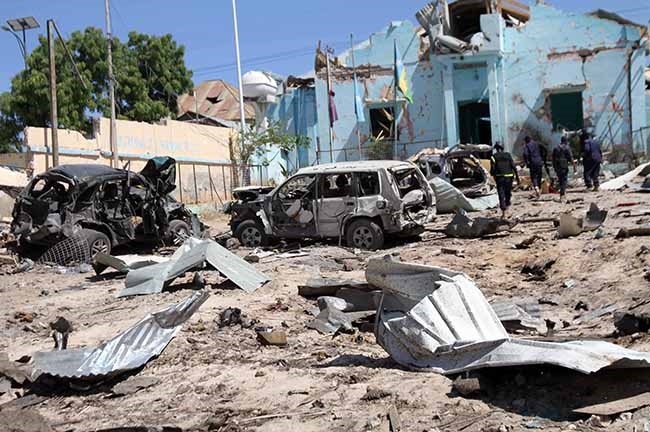 At least 15 people are dead after a suicide car bomber posing as a milk delivery van detonated at a district headquarters in Somalia's capital, police said Tuesday.

The death toll may rise, as some were badly hurt in the explosion at Wadajir district headquarters in Mogadishu, Capt. Mohamed Hussein told The Associated Press.

Most of the dead were civilians, Hussein said. Aamin Ambulance service said it had transported 18 wounded, seven of them women. Two of the eight bodies it transported were women, it said.

The al-Qaeda-linked al-Shabab group quickly claimed responsibility for the attack via its Shahada News Agency, according to the SITE Intelligence Group, which monitors extremist groups.

Turkey issued a strong condemnation of the "heinous terrorist attack".

In a written statement late Tuesday, the Turkish Foreign Ministry wished a speedy recovery to the wounded and conveyed condolences to people who lost loved ones.

"Turkey will continue to stand by the Somali people and its Government in the fight against terrorism," the statement stressed.

The blast comes less than a week after al-Shabab gunmen carried out an overnight siege on a popular restaurant in the Somali capital, killing at least 31 people.

The Somalia-based al-Shabab often targets high-profile areas of Mogadishu, including hotels, military checkpoints and areas near the presidential palace. It has vowed to step up attacks after the recently elected government launched a new military offensive against it.

Al-Shabab last year became the deadliest armed group in Africa, with more than 4,200 people killed in 2016, according to the Washington-based Africa Center for Strategic Studies.

The group also faces a new military push from the U.S. after President Donald Trump approved expanded operations, including airstrikes, against al-Shabab.