South Sudan no longer in famine but risk of starvation remains, says UN 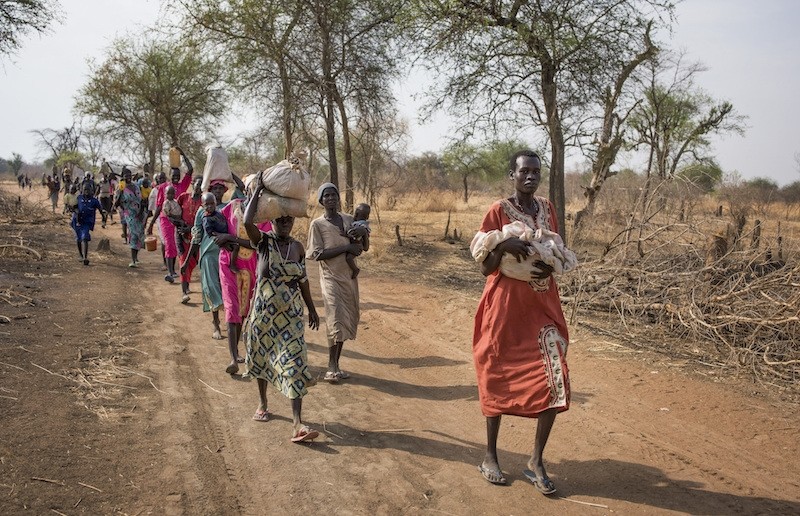 Thousands of people walk for hours to reach a food distribution site in Malualkuel, in the Northern Bahr el Ghazal region of South Sudan. AP Photo
by Daily Sabah Jun 21, 2017 12:00 am

An increase in international aid has lifted South Sudan out of famine, however the number of people at risk of starvation has increased over the last month, a UN-backed report has said.

The famine, announced in February, was the first be declared anywhere in the world since 2011.

Armed conflict, low harvests and soaring food prices have been blamed for the situation.

South Sudan's civil war began in December 2013 amid a power struggle between President Salva Kiir and his sacked deputy and long-time rival Riek Machar; the conflict has left tens of thousands of people dead, forced more than 3.5 million to flee their homes and caused economic collapse.

The UN's Refugees Agency warned in a new report Tuesday that South Sudan had the world's fastest growing refugee population last year, and was at risk of becoming the next Syria.

According to the IPC, famine is when at least 20% of the population has access to fewer than 2,100 kilocalories of food a day, there is acute malnutrition in more than 30 percent of children, and there are two deaths per 10,000 people, or four child deaths per 10,000 children every day as a result of malnutrition and hunger.

The IPC adds that the number at risk of starvation has increased to 6 million, up from 5.5 million last month.

Emphasizing that the end of famine does not mean the end of the crisis, the U.N warned that the situation in South Sudan is worsening.

In former Jonglei state, an area that previously had one of the lowest levels of acute malnutrition, roughly 20,000 people are experiencing catastrophic food insecurity.

The crisis has attracted attention from religious organizations and other charities, with Pope Francis offering 460,000 euros (more than $500,000) in aid for South Sudan to help finance two hospitals, a school and farm equipment.

"Since the Holy Father was unable to go to South Sudan in person, he wanted to concretely show the church's presence and closeness with the suffering people," Cardinal Peter Turkson, Francis' point-man for peace and refugee issues, told a news conference Wednesday.