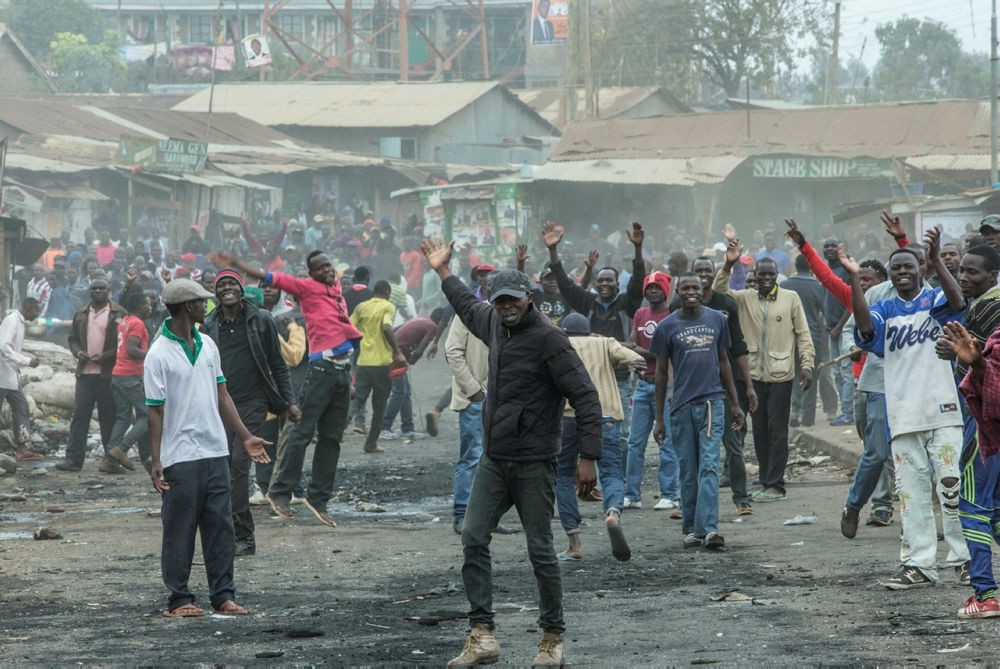 Supporters of Raila Odinga protest against an increased police presence as the final votes from Kenya's general election are counted in Nairobi, Kenya, 10 August 2017. (EPA Photo)
by Associated Press Aug 10, 2017 12:00 am

A dispute over Kenya's presidential election intensified Thursday when supporters of opposition leader Raila Odinga said an unofficial tally showed that he won — a claim that conflicted with a provisional official result that put incumbent Uhuru Kenyatta in the lead.

Although most of the East African nation was calm after Tuesday's vote, scattered clashes broke out between police and opposition supporters.

The uncertainty has left Kenya in political limbo, as its people await final results that they hope will dissipate tensions over vote-rigging allegations and preserve the long-term stability that has made the country a commercial hub.

Opposition official Musalia Mudavadi claimed to have "complete data" from election commission servers showing Odinga with a lead of several hundred thousand votes over Kenyatta, contrary to results on the commission's website that put the president more than 1 million votes ahead.

The opposition has received information from "confidential" sources in the election commission that indicates "the actual presidential election results contained in their database," Mudavadi said. He said there was a "serious attempt to try to either doctor or alter the final results."

Odinga, a former prime minister who has run unsuccessfully for president three times before, said hackers infiltrated the commission's computer system and manipulated results against him.

Commission chairman Wafula Chebukati said a hacking attempt was made but it failed. Election officials are painstakingly trying to confirm their provisional results showing Kenyatta in the lead with checks of documents from polling stations nationwide. The election commission has until Aug. 15 to release the final tally.

"The long wait is leading to tension," said political analyst Hezron Mogambi. "We are supposed by now to have had results, but the delay has been caused by the fact that the opposition had complaints about the system of transmitting results."

Clashes between police and opposition supporters erupted in a Nairobi slum. Police fired on rioters in Kawangware, a poor area of the capital, according to an Associated Press photographer. One wounded man was carried away by protesters who said police shot him. Demonstrators also burned tires in Kibera, another Nairobi slum.

Violence also broke out in Garissa county, where opposition supporters demonstrated against the announcement of a ruling party candidate as the winner of a gubernatorial race. Police tried to restore calm after part of the town's market was burned by arsonists, said a regional official, Mohamud Saleh.

On Wednesday, at least three people were shot and killed in confrontations between security forces and opposition supporters in several areas of Kenya.

The U.S. State Department urged Kenyans to refrain from violence and patiently await the election commission's announcement of the final results.

International observers said they have not noted any signs of interference with the vote and also urged calm.

"We affirm the conviction that the judicial process, the judicial system of Kenya, and the election laws themselves make full and adequate provision for accountability in this election. The streets do not," said former U.S. Secretary of State John Kerry, an election observer for The Carter Center, an international democracy promotion group led by former President Jimmy Carter.

Added Marietje Schaake, the Dutch head of the European Union mission observing the vote: "Elections should never be an issue of life or death."

She said Odinga's hacking allegations "should be seriously looked at" as part of the process of verifying the final tallies.

There was no immediate comment on the latest developments from Kenyatta, 55, whose father was Kenya's first president after independence from British colonial rule.

"People are demonstrating because of their rights," said Edwin Onyango, a supporter of the 72-year-old Odinga.

Odinga lost in a 2007 election that was followed by violence fueled by ethnic tensions that killed more than 1,000 people. He also lost the 2013 vote to Kenyatta and took allegations of vote-tampering to the Supreme Court, which rejected his case.

Some Nairobi residents said he should acknowledge another lost campaign.

"He has done a lot for this country," said James Maina Bajirane. "And at this particular time, at his age, he should concede defeat and the country goes on."