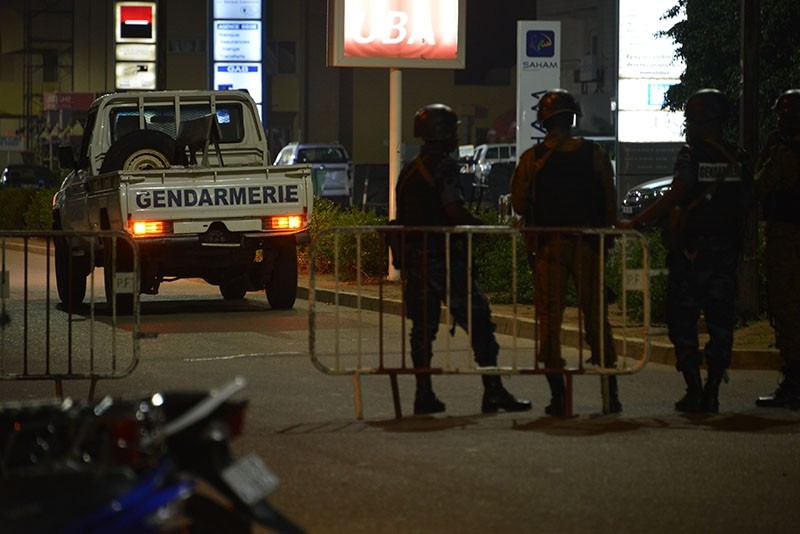 Burkina Faso gendarmes and army forces patrol the streets on August 13, 2017 as soldiers launch an operation against terrorists in Burkina Faso after gunmen attacked a cafe in the capital Ouagadougou. (AFP Photo)
by Compiled from Wire Services Aug 14, 2017 12:00 am

Suspected Daesh terrorists opened fire at a Turkish restaurant in the capital of Burkina Faso late Sunday, killing at least 17 people in the second such attack on a restaurant popular with foreigners in the last two years.

There was no immediate claim of responsibility for the violence, which continued into the early hours Monday. Gunfire could be heard almost seven hours after the attack began.

Communication Minister Remi Dandjinou told journalists that at least 17 people were dead and eight others wounded, according to a provisional toll. The victims came from several different nationalities, he said. At least one of the dead was Turkish.

Security forces arrived at the scene with armored vehicles after reports of shots fired near Aziz Istanbul, an upscale restaurant in Ouagadougou. The attack brought back painful memories of the January 2016 attack at another cafe that left 30 people dead.

Police Capt. Guy Ye said three or four assailants had arrived at the Aziz Istanbul restaurant on motorcycles, and then began shooting randomly at the crowds dining Sunday evening.

The Turkish Foreign Ministry confirmed in a statement that one of the victims was Turkish.

"We are deeply saddened to learn that a Turkish citizen was among the dead and another one is among the injured," the ministry said in a statement.

"We strongly condemn the terrorist attack that happened in Burkina Faso's capital Ouagadougou yesterday evening, which caused the death and injury of scores. We convey our condolences to families of victims and wish a speedy recovery to the brotherly Burkina Faso people."

French prosecutors told AFP that at least one French national was among the victims of the attack.

Macron, in a statement, also praised the "effective mobilization" of the Burkina security forces in ending the assault, which left at least 18 dead, including at least one French national, according to Paris prosecutors.

"The president of the republic will hold talks during the day with his counterpart, President Roch Marc Kabore, in order to evaluate the situation," said a statement issued by Macron's office on Monday.

The statement said France remained committed to working alongside countries in the region to fight against terrorist groups.

Burkina Faso, a landlocked nation in West Africa, is one of the poorest countries in the world. It shares a northern border with Mali, which has long battled terrorists.

The three attackers in the 2016 massacre were of foreign origin, according to the al-Qaida terror group, which claimed responsibility in the aftermath along with the terrorist group known as Al Mourabitoun. But the terror threat in Burkina Faso is increasingly homegrown, experts say.

The northern border region is now the home of a local preacher, Ibrahim Malam Dicko, who radicalized and has claimed recent deadly attacks against troops and civilians. His association, Ansarul Islam, is now considered a terrorist group by Burkina Faso's government.

The attack was the latest in a series of assaults in Africa targeting spots popular with foreigners and locals alike.

Here is an overview of the worst such attacks in recent years, most of which have been claimed by terrorist groups linked to Daesh or Al-Qaida:

June 18: At least two people are killed when terrorists stormed the Kangaba tourist resort popular with foreigners on the edge of Mali's capital Bamako. More than 30 hostages are freed.

January 15: Thirty people are killed, including many foreigners, in an attack on a top Burkina Faso hotel and a nearby restaurant in Ouagadougou. AQIM claims the assault, saying the gunmen were from the Al-Murabitoun group of Algerian extremist Mokhtar Belmokhtar.

November 20: Gunmen take guests and staff hostage at the luxury Radisson Blu hotel in Bamako in a siege that leaves at least 20 dead, including 14 foreigners. The attack is claimed by AQIM, which says it was a joint operation with the Al-Murabitoun group. Another terrorist group from central Mali, the Macina Liberation Front, also claims responsibility.

October 31: A Russian passenger jet is downed en route from Egypt's Sharm el-Sheikh resort to Saint Petersburg, killing all 224 on board. The Egyptian branch of the Daesh group claims responsibility. Russia confirms the crash was caused by a bomb.

August 8: Malian armed forces storm the Byblos hotel in the centre of the country, ending a hostage-taking by gunmen that leaves at least 12 people dead including four UN foreign contractors.

June 26: Thirty Britons are among 38 foreign holidaymakers killed in a gun and grenade attack on a beach resort near the Tunisian city of Sousse. The attack is claimed by the Daesh group.

March 18: Gunmen kill 21 tourists and a policeman at the Bardo Museum in Tunis in another attack claimed by Daesh.

March 7: A grenade and gun attack on the popular La Terrasse nightclub in Bamako kills five people -- three Malians, a Belgian and a Frenchman. The attack is claimed by Al-Murabitoun.