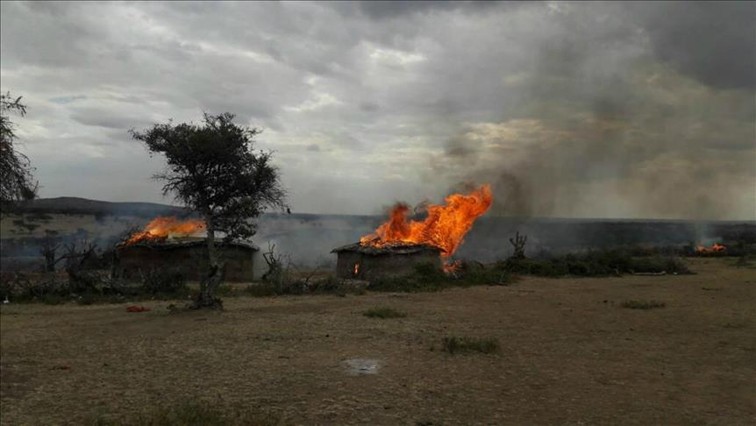 Simat Rotiken and his family are braving cold nights huddled under a tree after their homestead was burned down in a scheme to protect a disputed wildlife corridor.

They were driven from their pastures by security forces in a government policy aimed at securing the Loliondo Game Controlled Area next to the Serengeti National Park.

The government is seeking to force Maasai pastoralists off the land to preserve water supplies and resources for wild game, which is hunted by wealthy foreign tourists.

According to the Ortello Business Corporation, a Dubai-based company that was granted exclusive hunting rights in the 1,500-square-kilometer (580-square-mile) corridor in 1992, human settlement and cattle grazing has reduced the numbers of wild game.

"The situation has been compounded by the impact of climate change... which has seen the drying up of water resources and diminishing flora and fauna in an otherwise semi-arid terrain," a report released by the company in November 2016 said.

Ortello's arrival has seen the Maasai, who have used the area for dry season grazing for centuries, forced away from the land.

"They came around dawn and started burning our huts, we had to flee to save our lives," Rotiken told Anadolu Agency.

The 39-year-old herder is among many Maasai in the northern Ngorongoro district who are without shelter after their homes were razed to the ground to protect the corridor for hunters flown in by Ortello.

"I was keeping food and several cattle hides in the house, they are all destroyed," Rotiken said.

The government has said all homesteads built within the national park and protected sites will be torched.

"All settlements that would be found within conservation areas will be destroyed by fire and anybody found there with their livestock will be legally charged," the government said in a statement last week.

According to the statement, Maasai pastoralists residing within 5 kilometers (2 miles) of the Loliondo controlled area are to be removed.

The Maasai have accused the government of using wildlife conservation as a pretext to evict them from their ancestral lands.

"We have lived here all our lives," Rotiken said. "My children have known no other home than this one."

During the 10-day operation, which began on Aug. 12, several Maasai homesteads were reduced to ashes.

They claimed that livestock was seized by Serengeti park rangers, who then charged hefty fines for its return.

"I have lost a livelihood because I cannot trace my cows anywhere," Emmanuel Siololo, a Maasai from Ololosokwan village, told Anadolu Agency.

The move to evict pastoralists, who depend on moving their livestock with the seasons, is likely to affect livelihoods of more than 30,000 people, according to activists.

Susanna Nordlund, a Swedish-based land rights activist and blogger, urged the authorities to halt the operation and compensate Maasai families.

"The Tanzanian government must immediately stop the illegal operation, compensate for the loss of property and emotional damage, allow emergency grazing in Serengeti National Park and provide food and shelter for the victims," she said.

Yannick Ndoinyo, the ward councillor for Ololosokwan, said around 300 homesteads had been burnt, leaving around 2,000 people homeless.

He accused the district authorities of unlawfully invading village land and destroying property.

"The government and its agencies should observe the rule of law and respect the village land," Ndoinyo said. "In fact, they have to apologize and compensate us for the loss incurred."

"I don't know what is going on there," he said. "What I know is that those villagers were informed of the operation to remove livestock from protected sites."